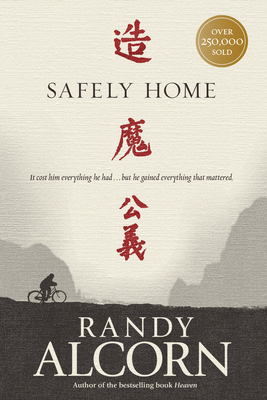 Now available in paperback. "Safely Home" is the winner of the Gold Medallion for fiction, a soul-stirring story of two college friends who reconnect after 20 years. One is living life apart from God in comfortable corporate America while the other is living for Christ under intense persecution in China. Read More

Now available in paperback. "Safely Home" is the winner of the Gold Medallion for fiction, a soul-stirring story of two college friends who reconnect after 20 years. One is living life apart from God in comfortable corporate America while the other is living for Christ under intense persecution in China. Read Less

All Editions of Safely Home

If God Is Good: Faith in the Midst of Suffering and Evil

Epicenter: Why the Current Rumblings in the Middle East Will Change Your Future

Inspiration to Live With Courage & Conviction

I have picked this book up on several occasions times at the library, yet had never read it. Like so many books that "you are simply meant to read", this title has continued to "pop out" from the shelves as I searched for something to read over the past several years, and finally hooked me this past week. What a week it has been! I am a Christian who often struggles to truly live as a Christian in a very materialistic and secular world. This book is an inspiration to me. It provides a model in the character of Li Quan of how a Christian is supposed live and act - with courage and conviction. In the face of immense opposition and persecution he remained true to his faith. The novel conveys very well the lengths to which Christians in China must go to practice their faith and the risks they take in staying true to their beliefs. It also serves as great reminder of the gifts we have been given as a society, that these are not "blessings" granted to chosen or favored souls, but, instead, are the treasures of Christ, bestowed upon us with the obligation that we use our wealth and health in the service of Christ, not the endless pursuit of amusement and pleasure. This is a quick read that will spark many moments of reflection about life and faith in the modern world.

This story opens with ?Is this the day, the day I die??

What would you do if your home was taken from you, your spouse swept off to an unknown place ? a prison, and you are left to rely on the support of others to live? What if they were sent to jail simply because they were a Christian? And what if situations like this actually existed in the world?

Such a situation is portrayed in Randy Alcorn?s book, Safely Home. Persecution is the focus as we see Quan smuggling in Bibles, meeting secretly in the middle of the night for worship services, and risking their very lives to worship Yesu. Ben is at first skeptical to Quan?s ways of worship but when tragic events unfold in their lives, Ben is affected personally, and their lives will never be the same.

In a day when books in the Christian market are all trying to point consumers to the ?secret of prayer? or ?steps to true intimacy with God,? Safely Home actually shows a portrait of Christians who have already attained intimacy with God through their hope despite persecution. I found myself almost envious.

All throughout this book are conversations between the two friends that reveal a developing dialogue that any christian could use when witnessing to friends or neighbors. In addition, the story includes a witnessing of these events by three members of the ?cloud of witnesses? in heaven. A great insight into a truth that we often neglect in our daily lives.

Memorable Moment:
The most profound moment of this book was a scene where Ben Fielding has bribed the jailors for a quick moment with Li Chuan. Ben sees the scars from the numerous beatings Li Chuan has endured while in jail. He is amazed as Li Chuan smiles, displays a peaceful countenance and reports that he has lead several men in the prison to salvation through Yesu.

Consider asking yourself the question ?Is this the day, the day I die??. Embrace the changes in your perspective that follow.

Below is a quick video of Randy Alcorn?s description of his work, Safely Home. Truly this is a project the world should read. All royalties will be donated to the persecuted church around the world.

This has to be one of the best books I've ever read. It gives real insight into the persecuted church in China, things we've been led to believe don't exist in the world anymore. It depicts what it really means to sacrifice for the cause of Christ. It makes my love for my Savior seem very weak and pale in comparison and has challenged me to boldly proclaim what Christ has done for me and what He means to me.