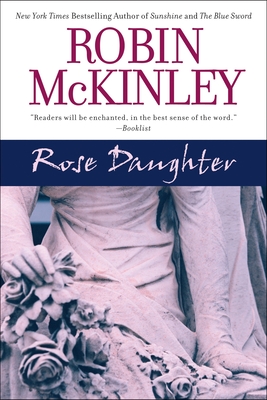 Twenty years ago Robin McKinley enthralled readers with the power of "Beauty". Now this extraordinarily gifted novelist retells the story of Beauty and the Beast but in a totally new way, with fresh perspective, ingenuity, and mature insight. A compelling, richly imagined, and haunting exploration of the transformative power of love. Read More

Twenty years ago Robin McKinley enthralled readers with the power of "Beauty". Now this extraordinarily gifted novelist retells the story of Beauty and the Beast but in a totally new way, with fresh perspective, ingenuity, and mature insight. A compelling, richly imagined, and haunting exploration of the transformative power of love. Read Less

All Editions of Rose Daughter

Beauty: A Retelling of Beauty and the Beast

The Hero and the Crown

The Queen of Attolia

Before Midnight: A Retelling of Cinderella

Door in the Hedge

Beauty: A Retelling of the Story of Beauty & the Beast

A different take from the mistress of fairy tales

"Rose Daughter" is Robin McKinley's second take on the Beauty and the Beast fairy tale, and boy did I have trouble with it as a teenager. I think it is because it is definitely a more mature look at the story; I just reread it for the second time after several years and this time around I understood the intent behind this new rendition.
This isn't intended to be cryptic, just to explain that as an idealist teenager, there were some things I didn't "get" about McKinley's new version.
One very interesting aspect of the story is that it is much more directly allegorical than her first book, "Beauty." In this retelling, Beauty's sisters are named "Jeweltongue" and "Lionheart," and they interact with characters such as the seamstress, "Mrs. Bestcloth," and the squire, "Mr. Trueword." The core of the story is the familiar arch of the merchant's family that loses everything in financial ruin, and moves to the country in their hardship. Of course Beauty sacrifices herself in order to save her father when he steals a rose from the castle of a mysterious Beast, and of course she ends up falling in love with this Beast. But the depth with which McKinley paints the experience of loneliness, regret, and heartbreak is something quite beautiful to read, and hard to describe in just a few short paragraphs. Read this for a moving love story (one with a lot of beautiful descriptions of roses).

This story differs greatly from McKinley's "Beauty" in tone and theme. She stays true to the original fairy tale, while still creating great depth. This telling is far more ... I want to say mystical, but that's not quite the whole feel. It's almost allegorical--for example, all the girls' names are indicative of their personality. And the magical elements are less abracadabra, more elemental and symbolic.
McKinley creates tension within the love story, and plot generally, using these symbolic elements, by pitting things that ought to play nicely together in opposition to one another instead--not just 'beauty' and 'beast,' but our preconceived notions of how the story ought to run, what's important and what's not. She even manages to make the ending a surprise, which is difficult with such a well-worn tale.
Highly recommended, especially if read in conjunction with "Beauty."