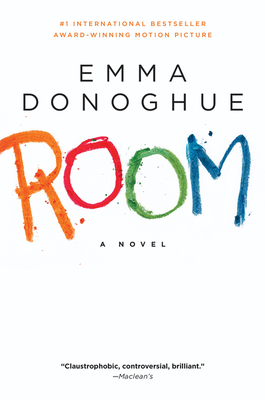 It's Jack's birthday, and he's excited about turning five. Jack lives with his Ma in Room, which has a locked door and a skylight, and measures 11 feet by 11 feet. He loves watching TV, and the cartoon characters he calls friends, but he knows that nothing he sees on screen is truly real - only him, Ma and the things in Room. Until the day Ma admits that there's a world outside . . . Told in Jack's voice, Room is the story of a mother and son whose love lets them survive the impossible. Unsentimental and sometimes funny, ... Read More

It's Jack's birthday, and he's excited about turning five. Jack lives with his Ma in Room, which has a locked door and a skylight, and measures 11 feet by 11 feet. He loves watching TV, and the cartoon characters he calls friends, but he knows that nothing he sees on screen is truly real - only him, Ma and the things in Room. Until the day Ma admits that there's a world outside . . . Told in Jack's voice, Room is the story of a mother and son whose love lets them survive the impossible. Unsentimental and sometimes funny, devastating yet uplifting, Room is a novel like no other. 'Emma Donoghue's writing is superb alchemy, changing innocence into horror and horror into tenderness. Room is a book to read in one sitting. When it's over you look up: the world looks the same but you are somehow different and that feeling lingers for days' Audrey Niffenegger 'Room is one of the most profoundly affecting books I've read in a long time. Jack moved me greatly. His voice, his story, his innocence, his love for Ma combine to create something very unusual and, I think, something very important . . . Room deserves to reach the widest possible audience' John Boyne `I loved Room. Such incredible imagination, and dazzling use of language. And with all this, an entirely credible, endearing little boy. It's unlike anything I've ever read before' Anita Shreve Read Less

All Editions of Room

The Pull of the Stars

I didn't care for this book a whole lot. Just didn't keep me enthralled. No edge-of-your-seat mystery or suspense. It was an okay story, but it's not a book I would read again.

Out of the last 30 audios I have listened to in the last 6 months, this was the best! So much so, that I could hardly make myself get out of the car when arriving at my destination. Great packaging, service! Highly recommend.

This is a very interesting book. The author has written a very thought out story. It grabbed me in the begining, remained interesting throughout, and then had a good ending too.

This author treated the subject so well. Her vocabulary and perspective were quite consistent and unique. It caused me to wonder how I might have survived in such circumstances. This mom was resourceful and dedicated! Deserved a great deal of admiration.

Only Donoghue! Donoghue Does it again! I can only imagine the reviews that have stemmed from this nobel--this book, this time, this place, the events--so few characters; from the mindset of such a young boy. Jack, who knows so much, but has so little. Then again, he knows nothing, really! So young as he is--and the world outside is full of wonder and things to fill him in knowledge, needs, wants, health, comfort--life.

A story, sad, not set on true events, but it could and sadly does happen. Shockingly told from the voice of a young boy, the writing is--beyond unflawed bittersweet. Made up metaphors from a boy, creating a language to save himself and his only loved one: his mother--"Ma." Beyond bittersweet, bittersweet as the colors of the crayons/ paint that spell out [R] [O] [O] [M] on the cover of this rare mind puzzler of pain, suffering, life-affirming, self-reflecting treasure of a read. Literally, a work impossible to put down. Highly recommend one to purchase on audio, or hire a babysitter for a good few hours! Sit back, grab some coffee, tea, or H20, and dive right in!

From Jack's simple, direct, relatable point of view; feelings of comprehensiveness arise yet, and perhaps most importantly, an effective tale will tickle the reader's brain. Donoghue jauntily muzes, a micelle, selectively targetting cognitive thoughts of readers' around the world--cognitive areas important to brain health indeed. FACT! Memory, attention, flexibility, processing speed and problem-solving skills--understanding the stark contrast of this young boy and his world, the sunshiny orange [R] and bright happy reds [O]; while taking in the pain and suffering the PTSD / panic attacks of the mother-- less orange [R] , more orcharous and estranged [R] , red [O] being less happy, less lucky; more heat, pressure, fire, hate, blood self-blame, guilt,--hell. Donaghue challenges the reader, constantly engaging, adapting, and engaging from one point of view to another--from Ma to Jack and back again. The imagination of Jack, the made up-but never-more true to him tales, trials and tribulations he tells of objects, plant (green!) [O] , TV, TV Characters, "Dora;" Warddrobe, Tooth-- living off love, his mother, bouncing light into (blue ! [M] )skylight -- outside room, where ma's (sad and blue [M] ) lies come true. An excerpt (http://www.roomthebook.com/inside/excerpt/) for green [O]:


When she spits the second time it's my go with Toothbrush, I scrub each my teeth all the way around. Ma's spit in Sink doesn't look a bit like me, mine doesn't either. I wash them away and make a vampire smile.

"Argh." Ma covers her eyes. "Your teeth are so clean, they're dazzling me."

Her ones are pretty rotted because she forgetted to brush them, she's sorry and she doesn't forget anymore but they're still rotted.

I flat the chairs and put them beside Door against Clothes Horse. He always grumbles and says there's no room but there's plenty if he stands up really straight. I can fold up flat too but not quite as flat because of my muscles, from being alive. Door's made of shiny magic metal, he goes beep beep after nine when I'm meant to be switched off in Wardrobe.

There's a little bit of light at Skylight's top, the rest of her is all dark. TV snow's white but the real isn't, that's weird. "Why it doesn't fall on us?"

"Because it's on the outside."

"In Outer Space? I wish it was inside so I can play with it."

"Ah, but then it would melt, because it's nice and warm in here." She starts humming, I guess right away it's "Let It Snow." I sing the second verse. Then I do "Winter Wonderland" and Ma joins in higher. We have thousands of things to do every morning, like give Plant a cup of water in Sink for no spilling, then put her back on her saucer on Dresser. Plant used to live on Table but God's face burned a leaf of her off. She has nine left, they're the wide of my hand with furriness all over, like
Ma says dogs are. But dogs are only TV. I don't like nine. I find a tiny leaf coming, I've seen her two times, that counts as ten.

Spider's real. I look for her now but there's only a web between Table's leg and her flat.

Table balances good, that's pretty tricky, when I go on one leg I can do it for ages but then I always fall over. I don't tell Ma about Spider. She brushes webs away, she says they're dirty but they look like extra-thin silver to me. Ma likes the animals that run around eating each other on the wildlife planet, but not real ones. When I was four I was watching ants walking up Stove and she ran and splatted them all so they wouldn't eat our food. One minute they were alive and the next minute they were dirt. I cried so my eyes nearly melted off.

Also another time there was a thing in the night nnnnng nnnnng nnnnng biting me and Ma banged him against Door Wall below Shelf, he was a mosquito. The mark is still there on the cork even though she scrubbed, it was my blood the mosquito was stealing, like a teeny vampire. That's the only time my blood ever came out of me.

Ma takes her pill from the silver pack that has twenty-eight little spaceships and I take a vitamin from the bottle with the boy doing a handstand and she takes one from the big bottle with a picture of a woman doing Tennis. Vitamins are medicine for not getting sick and going back to Heaven yet. I never want to go, I don't like dying but Ma says it might be OK when we're a hundred and tired of playing. Also she takes a killer.

Sometimes she takes two, never more than two, because some things are good for us but too much is suddenly bad.

"Why you don't take two killers all the bits of every day?"

"Like stuck on a hook, because I'd need them all the time. Actually I might need more and more."

Ma knows everything except the things she doesn't remember right, or sometimes she says I'm too young for her to explain a thing.

"My teeth feel a bit better if I stop thinking about them," she tells me.

"It's called mind over matter. If we don't mind, it doesn't matter."

When a bit of me hurts, I always mind. Ma's rubbing my shoulder but my shoulder's not hurting, I like it anyway.

I still don't tell her about the web. It's weird to have something that's mine-not-Ma's.

Everything else is both of ours. I guess my body is mine and the ideas that happen in my head. But my cells are made out of her cells so I'm kind of hers. Also when I tell her what I'm thinking and she tells me what she's thinking, our each ideas jump into our other's head, like coloring blue crayon on top of yellow that makes green.

Not prurient, not sensationalist, Donoghue's novel transfigures this darkest of stories into a revelatory, life-affirming, work of art. The story is told from Jack's credulous perspective. Eventually, he and his Ma effect an escape. At this point the book threatens to become a heavy-handed satire of the frenzied media interest in the Fritzl case: Ma's lawyer encourages her to sell her story ("living-on-less" image, it could not be more "zeitgeisty") and she agrees to a TV interview in which she is asked a series of predictably impertinent questions. But Donoghue's narrative soon recovers its former subtlety. Her account of Jack's adjustment to his new surroundings is exquisitely observed, and a fittingly biting yet bittersweet conclusion to [literally, no word other to explain it, but], unique novel.