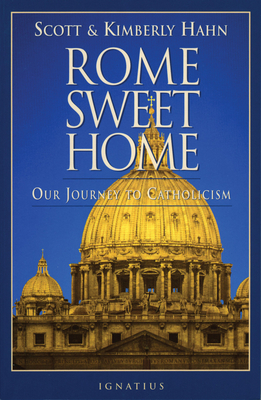 "Two ... Catholic apologists tell in their own words about the ... spiritual journey that led them to embrace Catholicism"--Amazon.com. Read More

"Two ... Catholic apologists tell in their own words about the ... spiritual journey that led them to embrace Catholicism"--Amazon.com. Read Less

The Lamb's Supper: The Mass as Heaven on Earth

A Father Who Keeps His Promises: God's Covenant Love in Scripture

Where is That in the Bible?

Reasons to Believe: How to Understand, Explain and Defend the Catholic Faith

Surprised by Truth: 11 Converts Give the Biblical and Historical Reasons for Becoming Catholic

Great book for learning about our faith

Great book by the Hahn's. Very insightfull about their journey to Catholicism. A great read for those contemplating the conversaion and marvelous reading for this lifelong Catholic who gained a much better understanding of my faith from this gift from Scott and Kimberly.

This book gave great insight as to why Catholics are suspect, even feared among the more evangelical/fundamentalist congregations. For Catholics, it provides a means to answer to the myths and misrepresentations. It was a book written from the heart.

This book is excellent is explaining the truth of the Christian faith. I am no longer tossed around in the waves of protestantism. Scott Hahn & his wife are truly messengers sent from God to help others see the true light of God in the Catholic faith. Highly recommend this book to any open heart who is searching for the truth.

This is a true to life spiritual journey of a very successful Evangelical Protestant Minister?s and his wife?s slow discovery of Roman Catholicism. The minister?s goal for studying Catholicism is to better convert Catholics away from their faith. However, the more he studies, the more his beliefs change. The minister and his wife write alternating chapters and she describes how she tries to get his minister friends to try to keep him from becoming a Roman Catholic. The story is a warm family tale of the struggles of two faith filled individuals who risk everything to follow their beliefs. The book is also very informative as it contrasts Protestant and Catholic beliefs in Protestant terms. I highly recommend this book.