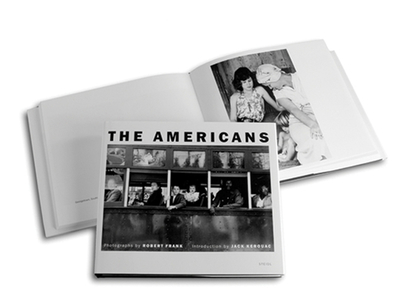 Originally published in 1958, "The Americans" was part of a series of books that presented foreign countries through words and pictures. Frank personally supervised this latest edition that features a new cover as well as digitally enhanced images. Read More

Originally published in 1958, "The Americans" was part of a series of books that presented foreign countries through words and pictures. Frank personally supervised this latest edition that features a new cover as well as digitally enhanced images. Read Less

All Editions of Robert Frank: The Americans

The Lines of My Hand

In 1955 - 1956, Robert Frank (b. 1924), an American photographer born in Switzerland, restlessly crossed the United States several times by car to photograph people and places as he found them. He gradually culled through thousands of photographs to select 83 images for his book, "The Americans" published initially in Paris in 1958 and in the United States in 1959 by Grove Press. In its initial publication, "The Americans" sold only 600 copies and received negative reviews. Its stature has grown with time. The book is now an American icon.

The United States publication of "The Americans" included an introduction by Frank's friend, Jack Kerouac, which had earlier been rejected by the French publisher. Frank did well in asking Kerouac to write the introduction. Years earlier, Kerouac had made a series of mad journeys across the United States resulting in his famous novel, "On the Road." Kerouac's book shows more of a romantic spirit than the unsentimental photographs taken by his friend. Kerouac's introduction captures the spirit of Frank's photographs and of Frank's portrayal of America and offers comments on several individual photos. It deserves its place as part of Frank's masterwork.

In celebration of the 50th anniversary of the book, the National Gallery of Art in Washington D.C. presented a major exhibition of Frank's work, titled "Looking In" which included the 83 photographs of "The Americans" presented in the order of Frank's book, together with other photographs that Frank took, including many photographs he took while he crossed America that did not make their way into the book. I was fortunate to visit the exhibition yesterday to see the photographs first hand. The National Gallery of Art has also published an encyclopedic version of Frank's book, "Looking In" which is large and expensive and includes much material in addition to Frank's now iconic collection of 83 photographs. My review here is of Frank's initial collection with Kerouac's introduction. The book is much less expensive than the reissue, is easier to handle, and provides the original version of Frank's masterpiece.

Frank's pictures do indeed draw the view into the scenes he depicts. The photographs include men and women, whites and blacks, rich and poor. The photographs show a certain loneliness, isolation, and unhappiness, regardless of social class. Thus, there are photographs of a lovely young woman operating an elevator, and of a hard-faced young woman behind a restaurant counter staring fixedly at the viewer. There is a photograph of a wealthy couple in Miami, of lavishly dressed gamblers at a Nevada casino, and of the elegant guests at a New York City cocktail party, drinks in hand, to benefit a school of art. Frank shows a segregated bus in New Orleans, and a scene of a stoic African American nurse holding a white baby in South Carolina. He photographs places, as well, a bar in Detroit, a collection of rubbish in the back yard of a Los Angeles home, that reminded me of works by Charles Bukowski, and the starkness of a men's bathroom and shoeshine stand - which Kerouac described as a place where the ladies don't go.

The photographs suggest the fascination of American's with their cars - one of the best works in the collection is the picture of the dividing strip of an open road at moonlight. They also show the fascination of many American's with the products of Hollywood - with starlets, cowboys, and television - together with the inauthenticity and emptiness of these concerns. Politicians, such as the photograph of the "city fathers" of Hoboken, New Jersey early in the collection, and of wheeling-dealing. cigar-smoking delegates at the Democratic Party's Presidential convention in 1956 (all men) come across as arrogant, crude, and ignorant. Many of the photographs are draped with flags, or other symbols, and many include comments on American religion, from an African American preacher who traveled up and down the Mississippi River for years to bring people to God, to the crosses, churches, and calls to repentance that dot the American landscape, to orthodox American Jews at the banks of the East River on Yom Kippur casting their sins into the water.

For all the melancholy, loneliness, and shallowness they convey, Frank's photographs show an understanding of the United States and a love of its people and places. His photographs of young people capture the alienation that has become commonplace since the 1950s, but also the search for love and meaning. His photographs capture the breadth of the United States, the difficulties of race relations, and the feelings of desolation, conformity, and tension, as people strive for financial security.

Eventhough all art comes down to a simple "like it" or "don't like it", great art has an additional bonus: you can appreciate the impact it has, even if you "don't like it", long after the first publication date.
"The Americans" was not an instant success. It had to be published in France with a vivid introduction by Jack Kerouac, to be appreciated back in the States. But as soon as it was known, it was considered a Bible for all the young photographers.
Robert Frank arrived in the U.S.A.in the fifties, from Europe, on a Guggenheim scholarship and he went on photographing America for quite some time, before concluding to the specific order of photos, from the enormous stock of photos he had gathered.
Many things have been said and written about it, but some facts are generally accepted: the unique way he uses his camera, (many vertical shots, the tilted subjects, the poor quality of the photos-technical wise, etc),and his desicion to use such photos (instead of others with better quality ) and in a specific order so that he can develop a narrative.
Eventhough there are various photography books about America, this was (and still is) a fresh way to look at things and at the same time a powerful artistic statement with universal appeal.
Many assumptions have been made about his new way of seeing America. Maybe it was because he was originally from Europe, or perhaps that he was into cinema as well or, even, his turbulent personal life. Probably all at the same time.
A genuine artist with a body of work to back this up. This is his masterpiece and the beginning of the quite revolution in the way of seeing things through a lens.