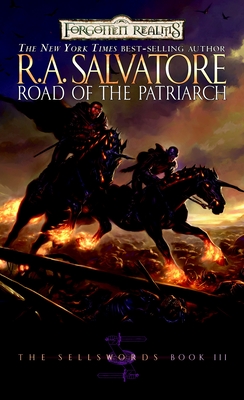 Road of the Patriarch

The final title in The Sellswords series from "New York Times" bestselling author R.A. Salvatore continues the escapades of Entreri and Jarlaxle, as they encounter the wrath of an angry paladin king in the dangerous Bloodstone Lands. Unabridged. 1 MP3 CD. Read More

The final title in The Sellswords series from "New York Times" bestselling author R.A. Salvatore continues the escapades of Entreri and Jarlaxle, as they encounter the wrath of an angry paladin king in the dangerous Bloodstone Lands. Unabridged. 1 MP3 CD. Read Less

All Editions of Road of the Patriarch

Books by R A Salvatore

Promise of the Witch-King

Road of the Patriarch, The Sellswords Book 3

This, the third book in the trilogy, is not as good as the second was. R.A. Salvatore tries to explain why Entreri is the way he is, by going all the way back to his childhood, and the town he grew up in. Throughout the whole book, Entreri and Jarlaxle find themselves caught between Spysong and the Citadel of Assassins, but never really committing to either. Calihye and Entreri relationship is still ongoing. Entreri is for the first time opening his heart up for another, because of the aid of Idalia?s flute. Calihye is caught between actually falling in love with Entreri, and her revenge for her friend Parissus, (lesbian lover?!). With the help of Kimmuriel and House Bregan D?aerthe, Jarlaxle tries to establish a foothold for the drow on the World Above. Jarlaxle claims Entreri as King Artemis the First of the ?unclaimed? Castle D?aerthe, formally the replica of Castle Perilous near the half-orc city of Palishchuk. This not only costs them the loyalty of Palishchuk, but forces King Gareth to raise his army against them! Deep down I hoped that Jarlaxle would prevail, but it is King Gareth who is the victor when he captures King Artemis the First. The conversations between both kings results in King Gareth becoming a better king for his kingdom. With no proof, only speculation, Jarlaxle, Entreri, and Athrogate are exiled. I?m still very fond of Athrogate. He?s a great character throughout the books!

Not what I thought

I liked the book, it just wasn't what I thought it would be. I expected the story line of Drizzet to keep going in this book. But this story wasn't about him. To me it was a little slow at first, then I got into the story and it was O.K. I would tell others its not a bad book. Just keep reading, it will get better. R.A. Salvatore is one of the besr writters around. I give Road of the Patriarch 3 stars...Thank you