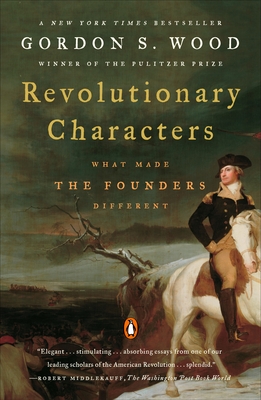 From "the most respected among all scholars of the colonial and Revolutionary periods"--"Washington Post World," comes a marvelous group portrait of the Founding Fathers, rich with insight into what shaped these particular men. Read More

From "the most respected among all scholars of the colonial and Revolutionary periods"--"Washington Post World," comes a marvelous group portrait of the Founding Fathers, rich with insight into what shaped these particular men. Read Less

All Editions of Revolutionary Characters: What Made the Founders Different

The Americanization of Benjamin Franklin

For much of our history, the leaders of the American Revolution and the framers of the Declaration of Independence and Constitution enjoyed iconic, mythic status. But they have also been subjected to criticism and debunking, based on their alleged elitism, racism, and sexism in our increasingly cynical, skeptical age.

In his recent collection of essays, "Revolutionary Characters: What Made the Founders Different" (2006), Gordon Wood offers thoughtful meditations on the Founders. Gordon Wood is Professor of History at Brown University. He is deservedly esteemed for his studies of the Revolutionary era.

In his book, Wood offers succinct discussions of the Founders, their backgrounds, what they did, and, most importantly, what they thought. He sets the Founders within their time but shows, paradoxically, how the success of the Founders made their achievements and characters impossible to replicate in subsequent generations.

Wood's book consists of individual essays on eight founders, Washington, Franklin, Jefferson, Hamilton, Madison, Adams, Paine, and Burr. His Introduction and concluding Epilogue attempt to bring coherence to the story. For Wood, what sets the Founders apart from subsequent leaders was their ability to combine high intellectual achievement in politics with the life of affairs and leadership. In much of the subsequent history of the United States, intellectuals and thinkers have been separated from active political life and, in fact, alienated from it. (Thus, the cynicism that I mentioned at the outset of this review.) He finds that the Founders were able to combine the world of intellect with that of practical politics through a devotion to Enlightenment and aristocratic ideals, including ideals regarding the role of an educated gentleman in society, and ideals of civil behavior and good manners, in a broad sense. The Founders were in part individuals who had risen by their own efforts, in most cases through education and study. They used their success to devote themselves to the good of the country and to expand the scope of public participation. This expansion of the scope of citizen participation in the government lead to democracy and egalitarianism and destroyed the conditions which had made the achievement of the Founders itself possible.

Of the essays in the book, the first, "On the Greatness of George Washington" is a reminder of why this reserved, austere figure deserves to be remembered as the greatest of Presidents and as the greatest member of an outstanding generation. The essays on John Adams and James Madison have the highest degree of intellectual content. In the Adams essay, Woods discusses Adams' political philosophy and shows how it was in part prescient and profound and in part based upon a misunderstanding of American constitutionalism. In the essay on Madison, Woods argues that there was a unity of thought throughout his career, rather than a switch from Federalism to states rights and democracy, as argued by many.

The essays of Thomas Paine and Aaron Burr are interesting in themselves and also for the light the cast on the other Founders. In both cases, Wood uses them as foils. Paine was already a democrat and a writer of inflammatory prose for readers without education or knowledge of the classics. This set him apart from his contemporaries. Aaron Burr abandoned the ideal and devotion to public service of the remaining founders and devoted himself solely to the pursuit of his own interests. This basic change, (and not his subsequent activities in the West for which he was tried for treason) is, for Wood, "The Real Treason of Aaron Burr."

Wood's book is an outstanding way to become reacquainted with the American Founders. It encouraged me to think about how American ideals originated, and how they developed and changed through time.