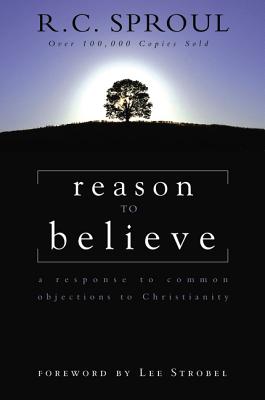 Reason to Believe: A Response to Common Objections to Christianity

This book deals with the tough questions of Christianity, giving sound answers for people who want to do more than scratch the surface of Christian truths. Read More

This book deals with the tough questions of Christianity, giving sound answers for people who want to do more than scratch the surface of Christian truths. Read Less

The Holiness of God

What Is Reformed Theology?: Understanding the Basics

The Last Days According to Jesus: When Did Jesus Say He Would Return?

Not a Chance: The Myth of Chance in Modern Science and Cosmology

Essential Truths of the Christian Faith

The Holiness of God

The Reasonableness of Faith

Subtitled, A Response to Common Objections to Christianity, R.C. Sproul once again shows himself to be a master teacher and apologist (defender of the faith).
He takes difficult concepts and explains the issues in an understandable way. He doesn't explain away hard questions like the existence of evil or the problem of suffering in a trite, one sentence answer. That would be unfeeling. He's not afraid to admit that some things are unknowable, but they are unknowable to the atheist as well. The difference is that underlying the big questions of life, the believer has hope that the atheist knows nothing of. Suffering has no meaning to an existentialist who has only this life.
Sproul deals with objections to the Bible itself, the fallacy of thinking all religions are the same, what happens to those who have never heard, charges that the church is full of hypocrites or is only for weak people, the idea that we only have to try hard to do the right thing, the existence of God, the case for life after death, and the problem of evil and suffering.
He does an excellent job of demonstrating the reasonableness of faith, while showing the futility and illogical conclusions of Christianity's detractors.
Sproul explains these things in a way that we can retain, so we can "give a reason for the hope that lies within us." (1 Peter 3:15)

We need to always be ready to give an answer to anyone who asks a
reason for thehope that is in us. R. C. Sproul does a very good job in:
1) Identifying the 10 most common objections to the Christian faith.
2) Providing solid Biblical answers to the basic objections and
3) Communicating complex truth in a way the average layman can grasp.
R. C. Sproul is abouot as good asit gets in Reformed Theology.
The book could provide an excellent outline for a sermon series or
a ten week seminr of apologetics. R. C. strikes this delecate balance:
1) He realizes the value and potential benefit of Apologetics while at the same time,
2) He realizes the limitations of Apologetics due to man's fallen nature.