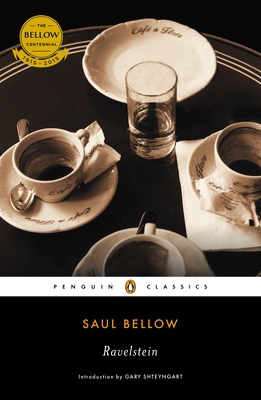 Abe Ravelstein is a brilliant professor at a prominent Midwestern university and a man who glories in training the movers-and-shakers of the political world. He has lived grandly and ferociously -- and well beyond his means. His close friend Chick, a writer, has suggested that he pen a book encapsulating his ideas, and much to Ravelstein's surprise he and becomes a bestselling millionaire. Ravelstein suggests in turn that Chick write a biography of him, and during the course of a celebratory trip to Paris, Chick plays ... Read More

Abe Ravelstein is a brilliant professor at a prominent Midwestern university and a man who glories in training the movers-and-shakers of the political world. He has lived grandly and ferociously -- and well beyond his means. His close friend Chick, a writer, has suggested that he pen a book encapsulating his ideas, and much to Ravelstein's surprise he and becomes a bestselling millionaire. Ravelstein suggests in turn that Chick write a biography of him, and during the course of a celebratory trip to Paris, Chick plays Boswell to Ravelstein's Johnson, narrating their life stories as the two share thoughts on mortality, philosophy and history, old loves, old suits, and old jokes. The mood turns more somber once they have returned to the midwest and Ravelstein succumbs to AIDS, yet this affectionate portrait of friendship remains by turn deeply insightful and always moving, as Chick himself faces his own brush with death.Saul Bellow's new novel is a journey through memory and friendship. It is brave, dark and bleakly funny: an elegy to friendship and to lives well lived. Read Less

The Closing of the American Mind

"Ravelstein" (2000) is a novel-memoir of the friendship between Allan Bloom and the author, Saul Bellow. In addition to exploring the friendship of the two men, the book's primary themes, to me, are the nature of love and the necessity of facing death, one's own and those dear to one.

In the novel, Abe Ravelstein is based upon Allan Bloom, a professor of political philosophy at the University of Chicago and a student of Leo Strauss (called Davorr in the book). Professor Bloom became wealthy when his 1987 book, "The Closing of the American Mind" became an unexpected best-seller. Bloom's book stresses the importance of philosophy and the humanities, particularly the philosophy of Plato, if education is to meet its function of forming thoughtful, passionate, and autonomous persons. He sharply criticized higher education in the United States, together with most of pop culture, for its failure to acknowledge or to pursue these goals. Bloom grew up in a Jewish family in the midwest.

Like Bloom, Saul Bellow grew up in a Jewish family in the midwest. Unlike Bloom, recognition came to Bellow relatively early in his career as a novelist. Bellow received the Nobel Prize in 1976. He has won three National Book Awards and the Pulitzer Prize.

The two men became fast friends relatively late in life and "Ravelstein" (2000) is a record of their friendship written by Bellow (born 1915) in his mid-80s. A painter with words, Bellow in a short space gives the reader an unforgettable picture of Ravelstein. The book disclaims an attempt to deal with Ravelstein's thought. But I think Bellow captures a great deal of it when he emphasizes how students must learn to leave home and the familiar and try to think for themselves. The picture of Ravelstein is larger than life, as Bellow gives us a passionate, expressive individual with most expensive tastes, a strong ego, a ribald sense of humor, and a passion for promiscuous homosexual sex. The book poignantly shows the reader Ravelstein's lingering death from AIDS.

We meet Bellow (Chick) in the book in the midst of an unhappy marriage to a woman named Vela. Vela is a world-renowned physicist but, to hear Chick tell it, she has little time for or interest in him. Chick and Vela are in the midst of a divorce when one of Ravelstein's young students, Rosamund,falls in love with him. Chick suffers a near-miss with death in an illness and Rosamund helps pull him through. The book presents a picture of the nature of love, I think, in the contrasts between the Chick -Vela and the Chick-Rosamund relationships. Ravelstein too has much to say about the nature of love, in his own voice and in the voice of his philosophical master, Plato, in the Symposium and the Phaedrus.

Friendship for Plato and Aristotle and for Bloom is the meeting of congenial minds with a common purpose. We see such friendship in "Ravelstein" in an interest in the life of the mind but we see something much more earthy too. Ravelstein and Chick are full of the life of the American midwest, of Vaudeville, of spicy humor, and of smutty language and stories. They enjoy each other's company and are able to be honest with each other -- even when each man has something painfully unpleasant to say about the other. They also share a common American Jewish heritage, both as it deals with secular American life and as a response to the Holocaust, which gets explored in substantial detail in this book. The two men reflect on death and on immortality, given Ravelstein's awareness of his own impending death and the aging Chick's close call with death.

This is a book of Bellow's old age. I think it will be remembered. The book will also, I think, keep alive the memory and teachings of Allan Bloom, as a person and as a teacher. The accomplishments and the names of Bloom and Bellow will be inextricably linked for many readers as a result of Bellow's story of their friendship.