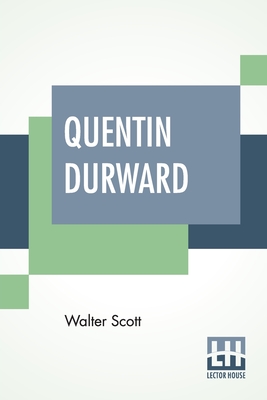 Quentin Durward is a young Scotsman seeking fame and fortune in the France of Louis XI in the fifteenth century. Read More

Quentin Durward is a young Scotsman seeking fame and fortune in the France of Louis XI in the fifteenth century. Read Less

All Editions of Quentin Durward

The Fortunes of Nigel

The Bride of Lammermoor

It was a happy surprise when I opened the package and realized I had in my hands an old library edition of one of Scott's classics, Quentin Durward. It has lovely art work .

The book arrived in good time and in excellent shape.

Quentin Durward - Satire on the code of chivalry

I recently watched the Hollywood movie version of Quentin Durward (in several Youtube installments), starring Robert Taylor, Kaye Kendall, and Robert Morley; and I decided to pick up a used hard-bound copy to read in the original literary format. Even after having read barely 70 pages of the book, including the 33-page "Introduction", I was able to affirm that for once Hollywood captured the book's droll, ironic humor, especially in the on-screen characterization of Louis XI (aka the "Spider King") as he was portrayed by Robert Morley.

I found myself chuckling aload at several passages in the introduction alone, in which Scott spends 31 pages describing a visit to France during a decline in his fortunes and his dismay at the ensuing conversion of his neice, Christian, to Catholicism, and her subsequent enrollment in a convent, and at his fifty-year-old Aunt's marriage to a French pop-in-jay described as looking "as if one pair of half-extended compasses had been placed perpendicularly upon the top of another, while the space on which the hinges revolved quite sufficed to represent the body ... the rest was mustache, pelisse, and callico trouser."

Scott eventually got around to the point of having an introduction, where (after 30+ pages) his host's remote Scottish lineage and extensive library of illuminated works on French history became the inspiration for this story about a Scottish adventurer's exploits during the era when Louis XI's Pre-Machiavellian intrigues solidified France into a modern state while simultaneously putting the final nails in the coffin's of both feudalism and the obsolescent "code of chivalry."

I finally finished th book, and it maintained its droll irony and dead-pan gallows-humor throughout! Very amusing - not at all what I had expected from Sir Walter Scott of all people.