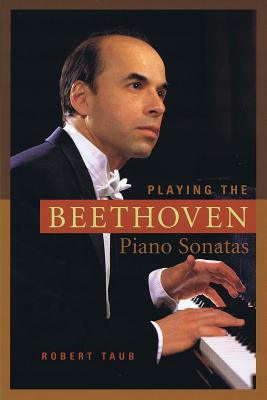 (Amadeus). Acclaimed pianist Robert Taub offers the insights of a passionate musician who performs all 32 of Beethoven's well-loved piano sonatas in concert worldwide, bringing a "fresh perspective on Beethoven," as the New York Times put it. In this book, he shares his intimate understanding of these works with listeners and players alike. HARDCOVER. Read More

(Amadeus). Acclaimed pianist Robert Taub offers the insights of a passionate musician who performs all 32 of Beethoven's well-loved piano sonatas in concert worldwide, bringing a "fresh perspective on Beethoven," as the New York Times put it. In this book, he shares his intimate understanding of these works with listeners and players alike. HARDCOVER. Read Less

All Editions of Playing the Beethoven Piano Sonatas

The Beethoven Sonatas and the Creative Experience

The Introduction to Tovey's Edition of the Beethoven Sonatas begins: "The Pianoforte Sonatas of Beethoven must always be among the choicest possessions of all who love music and especially of those who make music their main object and study." Robert Taub is a performer and scholar -- he serves as artist-in-residence at Princeton University who has performed frequently and recorded the cycle of Beethoven's 32 sonatas. He has written an excellent if difficult book offering the insights of a performer into Beethoven's great music.

Taub's book will inevitably be compared with Charles Rosen's recent study "Beethoven's Piano Sonatas: A Short Companion." The books share many insights but are written from different perspectives. Rosen's work is broader and more historical in scope. Taub's book is the work of a concert pianist and it reflects, in sometimes a personal way, on how he learned the sonatas, how he interprets each of these remarkably individual works, and how he performs them. There is a great deal of detail on the technique of piano playing as applied to each sonata. We learn how Taub chooses his tempo, how he pedals, how he voices and emphasizes the notes in a chord, the decisions he makes in phrasing and in holding his fingers. We learn when and why he slows down and emphasizes a passage and when and why he strives to play a passage brilliantly. It is a work by a pianist which seems to me to be primarily for other pianists. although much that he says will be of interest to music listeners as well.

In learning and performing a complex work of music such as a Beethoven sonata, Taub writes, a performer makes an implied moral contract with the composer. The contract requires the performer to delve into the music and to internalize it in order to understand what the composer wished to express. The performer effectively promises the composer to bring the music to life so that the audience may understand and be moved by the work -- so that the hearer may respond to and carry the music with him or her. For Taub the moral contract between performer and composer requires careful study of the score and -- particularly in the case of Beethoven -- a study of various editions of a particular work and of Beethoven's sketches, autographs, musical markings, and letters that cast light on how he conceived the work. The performer works with the composers intentions, for the work in its entirety as well as in part, to try to bring something of the power of the music to life. The music itself is inexhaustable and cannot be encompassed in any single performance or interpretation.

Following a discussion of general musical principles applicable to all the sonatas, Taub describes how he arranged them for performance of the cycle. This is probably the single most interesting part of the book. Taub decided against playing the sonatas simply by following the opus numbers but tried to arrange them thematically. I learned a great deal about Beethoven's sonatas simply from Taub's discussion of how he ordered them and from his discussion of how he chose the works he did for each individual program.

Taub's discussions of each individual sonata, in his nine programs, constitute the heart of the book. The discussions show, indeed, how Taub has thought of and internalized this music in trying to share it with his public. The discussion is fascinating as well in teaching how a performer works and learns. For those who attempt to play this music, as I do, there is a great deal to be learned from Taub's love for this music, his patience and his attention to musical detail. As Rosen did in his book, Taub spends a great deal of time in discussing Beethoven's opus 54 sonata (which lies between the Waldstein and Appassionata sonatas) and which is little performed. But I feel that Taub's heart is mostly with the final "transcendental" sonatas -- opus 90, (which Taub I think properly groups with the last 5 even though this is not usually done) opus 101, opus 106 (the Hammerklavier), 109.110 and 111. There are some interesting details in the book -- we learn that Taub spent 8 years working on the Hammerklavier before venturing a public performance -- and that Benny Goodman once told Taub after a private performance of the Waldstein sonata that a performer who really wanted to play a work such as the Waldstein had to "make it his own". Wise advice and the reference to Benny Goodman makes it special.

Taub has written a detailed, useful, pianistic study of some of the greatest music ever composed.