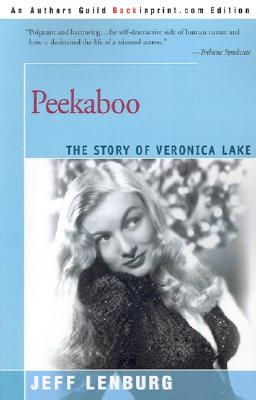 Peekaboo: The Story of Veronica Lake

All Editions of Peekaboo: The Story of Veronica Lake

The Encyclopedia of Animated Cartoons

Peekaboo: The Story of Veronica Lake, Revised and Expanded Edition

All the Gold in California: And Other Places, People and Things; A Country Music Superstar's Fall from Grace and Remarkable Return to Faith

Pin-Up: The Tragedy of Betty Grable

Book was just as described with no problems with the purchase or shipping of it.

Of all the books and I've read some, about, famous early Hollywood stars, this must surely rank as one of the saddest.
Veronica Lake, was one of the screen icons of the late thirties and forties.
She was tiny and extremely beautiful, with lovely blonde hair, that ,cascaded over one eye.
Women went crazy for the hair style and her early films were box office hits.
Especially memorable were 'Sullivan's Travels', 'I Married a Witch' and several films with Alan Ladd, beginning with a film adaption of 'This Gun for Hire' , based on the book by Graham Greene.
Unfortunately, the powers that be at Paramount , misogynistic, in the extremity ,saw to it that her films began to be nothing more than eye candy affairs without any dramatic flair or taste.
Consequently, her career screeched to a halt and the aftermath of her fallen status, produced an increasingly sordid existence of dependence on alcohol and drugs.
She became increasingly unstable and her life careered out of control and she died an early death in the 1970's, no longer recognisable, as the beautiful blonde star of yesteryear.
Luckily, her early films are now available on dvd for all to see and marvel at.
Not an original story, as many others have fallen along the way in Hollywood.
However, it is well written and carries the reader on towards it's tragic conclusion.
A sad, cautionary tale, of a life stolen.