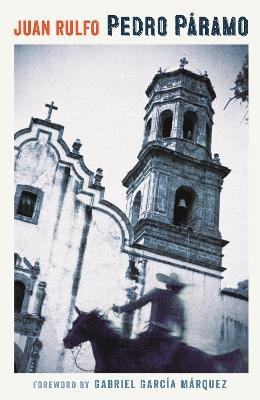 As one enters Juan Rulfo's legendary novel, one follows a dusty road to a town of death.Time shifts from one consciousness to another in a hypnotic flow of dreams, desires, and memories, a world of ghosts dominated by the figure of Pedro P?ramo - lover, overlord, murderer. Rulfo?s extraordinary mix of sensory images, violent passions and unfathomable mysteries has been a profound influence on a whole generation of Latin American writers including Carlos Fuentes, Mario Vargas Llosa and Gabriel Garcia Marquez. To read ... Read More

As one enters Juan Rulfo's legendary novel, one follows a dusty road to a town of death.Time shifts from one consciousness to another in a hypnotic flow of dreams, desires, and memories, a world of ghosts dominated by the figure of Pedro P?ramo - lover, overlord, murderer. Rulfo?s extraordinary mix of sensory images, violent passions and unfathomable mysteries has been a profound influence on a whole generation of Latin American writers including Carlos Fuentes, Mario Vargas Llosa and Gabriel Garcia Marquez. To read Pedro P?ramo today is as overwhelming an experience as when it was first published in Mexico nearly fifty years ago. Read Less

All Editions of Pedro Pßramo

The Plain in Flames

Pedro Paramo: A Novel of Mexico

The burning plain, and other stories.

In this 1955 novella, a young man, Juan Preciado, promises his dying mother that he will find his father, the Pedro Páramo of the title, and claim his birthright. Juan has no independent memories of his father. His mother fled her abusive and loveless marriage shortly after Juan?s birth and raised him by herself in a city far away from his father?s ranch.

After burying his mother, Juan sets off for Comalá where his father?s ranch is located. When he reaches his destination, he finds an eerie, nightmarish town, inhabited entirely by ghosts. Comalá is a veritable graveyard where the dead relive their intolerable memories. All of those memories revolve around Pedro Páramo, the corrupt local boss, who turned Comalá into a hell on earth.

Juan Rulfo?s writing is surreal and dreamlike. This novel reads as if the main character (and the reader, for that matter) is experiencing a nightmare. The narrative contains many abrupt shifts in time and frame of reference. These rapid shifts are disorienting, and greatly enhance the novel?s disturbing effect. There is one memorable passage, where Juan is wandering the deserted streets and houses of Comalá, when suddenly the whole town fills up with water and Juan experiences the sensations of drowning. I could swear that passage is right out of one of my own nightmares.

This book is far more than a ghost story. Like Toni Morrison?s Beloved, Pedro Páramo is a social allegory in the form of a ghost story. The novel is filled with symbols and double-meanings. For example, Páramo means wasteland in Spanish (in fact, the Mexican edition of T. S. Eliot?s The Wasteland is titled El Páramo). Juan Preciado is on a quest for his legacy. Instead, he finds a wasteland, populated by ghosts. The novel is a social allegory of mid-twentieth century Mexico. From 1910 through the 1940s, Mexican society endured civil unrest, a revolutionary war, the Porfirio Diaz dictatorship, anti-clerical purges, urbanization and secularization. An urban Mexican seeking his roots, finds a similarly bleak legacy of war, rampant poverty, destroyed haciendas and disbanded monasteries. Author Juan Rulfo was born to an upper class Mexican family. By the end of the Mexican Revolution, Rulfo?s parents were dead and Rulfo himself was in an orphanage. Rulfo experienced firsthand the losses symbolically portrayed in his only novel, Pedro Páramo.

Although this short novel is difficult to follow, it contains some of the most surreal and imaginative writing I?ve ever read. It is both remarkably beautiful and remarkably disturbing. I recommend reading it through once and then skimming through it a second time to put the story into context and perspective. This novel is particularly worthwhile for readers with a Spanish language background and an interest in Latin America. It is an excellent novel.

A Town of Ghosts

As a promise to his dying mother, Juan Preciado returns to Comala to visit his father Pedro Paramo only to find a town inhabited by ghosts. The novel becomes a kind of chorale of voices and orchestration of sounds not unlike Woolf's The Waves. Considered one of the finest Latin American fiction writers of the 20th century, Rulfo's oeuvre is small and his fame rests on Pedro Paramo, published in 1955, in which he intended to capture the regional speech of his home state Jalisco, Mexico.

The social themes of the novel include the Mexican Revolution, religion and the clergy, and the cacique (boss) system, while his broader themes are love, hate, vengeance, violence, solitude, time, and the anguish of human existence. By evoking the campesino (peasant) through his simple yet poetic speech, the author elevates the character to mythic status. One of the novel's innovations is its structure which is composed of the fragmentary remembrances of Comala's deceased residents. "I sought dead characters who do not exist in time nor in space," Rulfo said. "There is a structure in Pedro Paramo but it is a structure of silences, of threads in a tapestry, of scenes cut short, because everything is happening in a time that is simultaneously a non-time." The post-revolutionary elemental landscape of Jalisco, where Rulfo's father, uncle and grandfather were murdered and life coexists with death, is suggested by the novel's names: Pedro (stone), Paramo (aridity), Comala (heat). The novel has influenced Gabriel Garcia Marquez among others. A harsh, haunting tale.