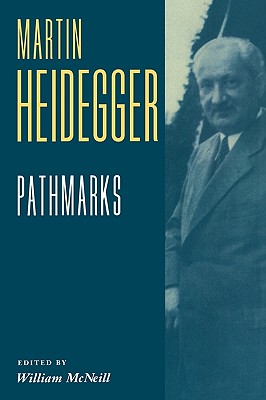 New and updated translations of a seminal collection of essays by Martin Heidegger. Read More

New and updated translations of a seminal collection of essays by Martin Heidegger. Read Less

Husserl: an analysis of his phenomenology.

Introduction to Philosophy--Thinking and Poetizing

Martin Heidegger (1889 - 1976) is best-known as the author of a seminal work of 20th Century philosophy, the notoriously difficult "Being and Time" (1927). Heidegger wrote a great deal besides "Being and Time", and many of his important writings are gathered into this collection of essays, "Pathmarks". Heidegger first published the volume as "Wegmarken" in 1967 and it appeared in English in 1998. The book consists of 14 previously-published essays ranging in dates from 1919 through 1961.

As does "Being and Time", the essays in "Pathmarks" make for difficult reading. But they largely reward the effort required. While much of the essays remain opaque, I found that they increased my understanding of "Being and Time" and of the direction of Heidegger's thought. For those unfamiliar with the direction of Heidegger's work, Heidegger is concerned with the nature of "Being" rather than with the study of particular beings. Heidegger thinks that Western thought has lost understanding of the nature of Being - and of the importance of the question of Being - through its preoccupation with beings, especially with science and technology. He seeks to restore an understanding of the importance of thinking about Being. Heidegger also wants to change the reader's understanding of truth from a view in which, say, sentences are true when they somehow represent reality (such as, the sentence "the cat is on the mat" is true when a cat is on the mat) to a view in which truth is a property of things. This view of truth ties into Heidegger's thoughts on Being. Truth is a disclosedness, a presencing of Being rather than a representation. The representational view of truth may have some merit in considering beings, but it has come to displace the presencing nature of truth in considering Being.

In "Being and Time" Heidegger approached Being through his study of human being, which he called "dasein". Heidegger studied dasein through what he termed a phenomenological method that he derived and changed from his mentor, the German philosopher Edmund Husserl. Shortly after writing that book, his thought underwent a turn (a Kehre in Heidegger's words) in which he tried to focus on Being rather than dasein. He tried to approach Being through language, thought and especially poetry rather than through concepts. His later works thus go far beyond phenomenology and frequently are delivered in a style that approaches preaching.

"Pathmarks" includes works that predate "Being and Time" as well as late essays that show the turn. The book thus opens with a long early essay "Comments on Karl Jaspers's Psychology of Worldviews" which shows Heidegger's early thinking and is a predecessor of "Being and Time". The essay "Phenomenology and Theology" was written about the same time as "Being and Time" and it is a rare venture by Heidegger into Christian doctrine. But this essay also includes some additional and important material that Heidegger added much later, in 1964. The collection includes Heidegger's 1929 lecture, "What is Metaphysics" which explores the relationship between science and philosophy in a provocative way. The positivist philosopher Rudolph Carnap later ridiculed this essay for its proclamation that "the nothing nothings itself." Heidegger elaborated upon and tried to explain this lecture in a "Postscript" that he wrote in 1943, also included in "Pathmarks."

This collection includes three important essays, "On the Essence of Ground" (1929) which elaborates the distinction between Being and beings, the companion essay "On the Essence of Truth" (1930) which discusses truth as presencing. In the "Letter on `Humanism' of 1946 Heidegger distances himself from existentialism, responds to criticisms of his work, and explains the turn in his thought.

I was fascinated by the essays in this volume in which Heidegger discusses great earlier philosophers and relates their work to his own. "Pathmarks" includes important essays on Plato (his allegory of the cave and concept of truth), Aristotle (his concept of "nature"), Leibniz, on the nature of Being, Kant, on the ontological argument, and Hegel, on his view of Greek philosophy. It is always wise to be wary of one philosopher's understanding of other philosophers, and Heidegger's interpretations are often criticized. I find his readings of his predecessors frequently insightful. And these essays are important in approaching Heidegger's own thought.

Heidegger saw his works as reflections on Being rather than as the development of a systematic philosophy. It is best in this matter to take him at his word. Heidegger was tarnished by his political commitments during the 1930s, and these commitments must be kept in mind in working through and assessing his writings. However, there is still much to be learned here.

My recommendation is that readers with some background in philosophy should first struggle through "Being and Time" before approaching the essays in this collection. Readers who become fascinated with "Being and Time" and who want to pursue Heidegger's thought further will learn a great deal from turning to "Pathmarks."