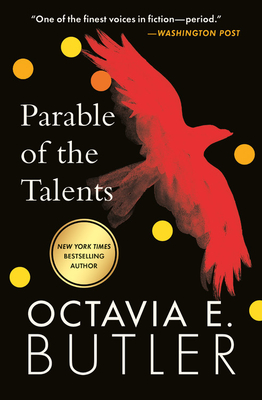 Parable of the Talents

Invoking a world or war-torn devastation, and with a far-right religious crusader elected as president, this is a book about a society whose very fabric has been torn usunder. Read More

Invoking a world or war-torn devastation, and with a far-right religious crusader elected as president, this is a book about a society whose very fabric has been torn usunder. Read Less

All Editions of Parable of the Talents

Parable of the Sower

Bloodchild and Other Stories

Where Late The Sweet Birds Sang

Hive of Dreams: Contemporary Science Fiction from the Pacific Northwest

Impressive Continuation of the Earthseed Series

I enjoyed the first book, Parable of the Sower, so I had to read this. Butler's post-apocalyptic America seems to particularly resonate now, as we descend into the depths of a pandemic. I was especially struck by the near clairvoyant depiction of the fundamentalist US president who, "wanted to make America great again."

I enjoyed the continuing journey of Butler's main character Lauren Oya Olamina. I don't want to give up the many plot twists to future readers. But I will say the novel contains a well-crafted narrative shaped by the journals of the main character, her daughter, and in a few instances her brother. It works very well as the reader tries to figure out how these different threads join together in a final truth. I found the final denouement subtle, and devoid of a trite ending, and the author provides an emotionally well-founded bittersweet explanation for the final outcome.

That said, I can only wonder what the series might have been. I understand that Octavia Butler was working on a continuation (perhaps several volumes), but she hit writer's block before she passed away, and only left the two books in this series. Aside from the solid emotional narrative of the paths of the three main characters, the success of Earthseed, after some grave trials, seemed just too good to be true, and kind of rushed at the end. Almost like the author was trying to wrap the book up and move on. That could have contributed to Butler's inability to continue the narrative. At least it left this reader with the feeling that while her work was done on Earth, but there could well have been more to unwind in space.