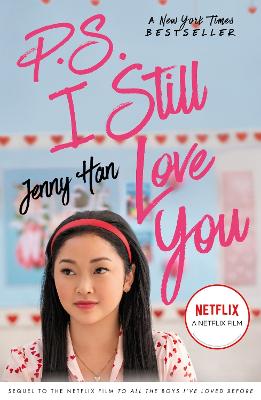 P.S. I Still Love You

Lara Jean and her love letters are back in this utterly irresistible sequel to NETFLIX feature film To All The Boys I've Loved Before. Lara Jean didn't expect to really fall for Peter. But suddenly they are together for real - and it's far more complicated than when they were pretending! A risque video of the two of them has been posted online. Will Lara Jean ever live it down? Peter is spending more and more time with his ex. Has he still got feelings for her? A ... Read More

Lara Jean and her love letters are back in this utterly irresistible sequel to NETFLIX feature film To All The Boys I've Loved Before. Lara Jean didn't expect to really fall for Peter. But suddenly they are together for real - and it's far more complicated than when they were pretending! A risque video of the two of them has been posted online. Will Lara Jean ever live it down? Peter is spending more and more time with his ex. Has he still got feelings for her? A boy from Lara Jean's past has returned, and so too have her feelings for him. Can a girl be in love with two boys at once? Only one thing is certain: falling in love is just the easy part! The second book in the bestselling series by Jenny Han, which has been made into a NETFLIX feature film Always and Forever, Lara Jean is the third book in the trilogy Read Less

All Editions of P.S. I Still Love You

The Summer I Turned Pretty

It's Not Summer Without You

Isla and the Happily Ever After

Since You've Been Gone

The Summer I Turned Pretty

You will love this if you read the first one!

All i want to tell you is that so far this book is super good, the first one I enjoyed it so much and this one even better.

I wasn't much impressed by the prequel novel, but I felt this one had some redeeming qualities, right until that ending. In this second book, Lara Jean and Peter are initially broken up (but were they even really together?) but she wins him back. However, before they can fully revel in their new relationship, a video of them in the hot tub goes online and they are basically a meme. Lara Jean feels humiliated and she pretty much knows it is Gen, but Peter just says that he will handle it and that it can't be Gen. Meanwhile, Lara Jean also has to deal with her insecurities - this is her first boyfriend, said boyfriend has baggage by the name of one vindictive ex, and there's also the fact that she doesn't know how fast or slow to let the relationship progress. You can see how it would feel for a teen girl like her to feel anxiety over so many things, but she tries to keep her chin up and get through it, let her life proceed normally, have awesome and heartening moments with her family, etc.

Then comes John Ambrose McClaren - who sort of had a weird sidebar intro in the previous book. His entry brings back the nostalgia of their friendship in middle school, and for old times' sake, they engage in a game of assassin. Her interactions with him increase as their lives keep intersecting and she starts to like him, too. But she is still pretty much in love with Peter, who is starting to feel distant to her. Combine that with Peter being there on more occasions for Gen than for her, it is a recipe for disaster. I was leaning much into John for this book - he is so cute, and honestly a better pick than Peter, who keeps letting her down. He often acts jealous, even though he himself still keeps Gen in his life, despite her being terrible to Lara Jean. His priorities are also often messed up when it comes to which girl's feelings he should spare. He says pretty things, but his actions prove otherwise.

While I would have normally said that these storylines made for a compelling arc, the truth is that it all comes down by the end. I felt that the violation of Lara Jean's privacy by that video wasn't given enough weight in the end, when it is revealed who did it. That person did not even show remorse for their actions, and instead blamed Lara Jean for a long ago slight, and Lara Jean even felt bad for it. I get a feeling that more often than not, Lara Jean is showing a doormat personality. There is being a nice person and then there is letting people walk all over you, and while Lara Jean shows a spine sometimes, when it counts she also backs down. The starting of the book was good, but then the ending ruined it and I was disappointed all over again. I am holding off reading the final book (because I want to get the last resolution to the story, whatever it is) until such time I feel less angry about the ending of this one.