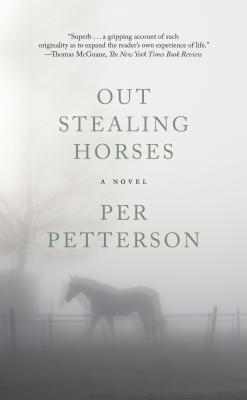 An early morning adventure out stealing horses leads to the tragic death of one boy and a resulting lifetime of guilt and isolation for his friend, in this moving tale about the painful loss of innocence and of traditional ways of life that are gone forever. Read More

An early morning adventure out stealing horses leads to the tragic death of one boy and a resulting lifetime of guilt and isolation for his friend, in this moving tale about the painful loss of innocence and of traditional ways of life that are gone forever. Read Less

All Editions of Out Stealing Horses

Books by Per Petterson

I Curse the River of Time

It's Fine by Me

The Elegance of the Hedgehog

We Decide For Ourselves When It Will Hurt

n a scene early in Per Petterson's novel, an adolescent boy named Trond Sander is mowing hay with a scythe in the company of his father. Trond comes to a patch of nettles and is afraid to cut them even with the scythe. His father then pulls the nettles up with his bare hands. He instructs Trond with the words that are the title of this review. It is a lesson that Trond ultimately learns for himself during the course of this book.

"Out Stealing Horses" is set in rural and remote east Norway. The book is told in the first person by Trond who in 1999 at age 67 has moved to a primitive cabin in the woods to find peace, solitude, and an opportunity for reflection. The time frame moves back and forth between Trond's chosen life in the cabin and the events of his adolescence in the late 1940s. The earlier period of the narrative centers on Trond's relationship with his father, a relationship which involves both love and deep dissapointment.

The book moves slowly, deliberately, and with understatement. Much of the story is told through indirection. Trond offers important hints of the course of his life between his adolescence and his retirment to solititude, but much is left unsaid. In his stay in the woods, Trond meets a neighbor named Lars who also pursues a quiet, solitary life. Lars was the brother of Trond's childhood friend, Jon, and the stories of the two men are intertwined as Trond recollects and tells his story.

The book includes descriptive passages of the rivers, lakes and woods of Norway and Sweden and of the harshness of the winters and of the difficult work of rural life. The book includes several intricate subplots, including accounts of Trond's father's work in the resistance movement during WW II, and a story of the hazards of harvesting timber and floating it downstream. The stories build slowly and are interwoven skillfully. Petterson develops the parallels between Trond's adolescence and his life as an elderly man.

Trond spends his evenings in his cabin with his dog Lyra and with rereading Charles Dickens. The novels "David Copperfield" and "A Tale of Two Cities" get considerable attention in this book as Trond relates them to the story he himself has to tell. The reader is given a glimpse of Trond's apparently successful career, of his failed first marriage and of his awkward relationship with his two daughters when his elder daughter Ellen pays him a surprise visit. Trond also offers a revealing scene of one of his relationships between his first and second marriages. A woman whose name Trond cannot remember was knitting him a scarf and mittens. Trond remembers only the click of this former lover's knitting needles as her ways were quiet and calm. "It was all too low key for me" he observes "and the relationship dwindled into nothing."

This novel takes some patience to read. The form of the book, in terms of a first person narrator interweaving stories of present and past has been overrused in recent novels, but Petterson uses it effectively here. This book encourages reflection upon love, human contact, and pain, and upon their relationship to the nature of independence and self-reliance.

A very good book, I can recommend it everybody.It was the first book I ever read from Per Petterson, so far it is his best.

Excellent novel. Read it from library. Decided to buy and share with family.

This story about a Norwegian man looking back on his life is almost sneakily wonderful; I was halfway through it before I realized how invested I was. Petterson's prose reminds me of Wallace Stegner in its simple elegance which is about as high praise as I can give. The story itself is about loss, and loneliness and families falling apart - towards the end, the story ended up being just shy of fully satisfying, but it's a truly special novel that is well deserving of all the praise it has gotten.