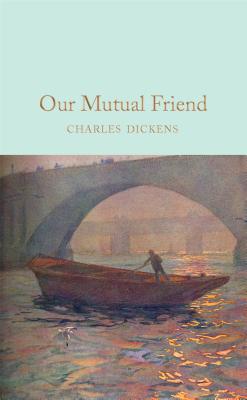 All Editions of Our Mutual Friend

Dickens' Our Mutual Friend is a great read and this is a good readable addition with good notes. We recommend it.

I've read 14 Dickens novels (am on my 15th) and have enjoyed this one the most. The plot lines are engrossing -- it's fascinating to see how they intertwine. The male characters and their psychologies are so well drawn that it's hard to imagine they're not real, especially Wegg, Rokesmith, Headstone, and -- as minor as he is -- Twemlow.

The theme of identity plays out on many fascinating levels, like peeling an onion. There are identities that are kept secret, deliberately misrepresented, misunderstood, self-questioned, and illusory. It makes for a fascinating psychological study.

Setting is particularly well done in this novel -- the river is so predominant that many scholars consider it one of the book's characters, and rightly so.

Some plot denouements require suspension of disbelief (doesn't Dickens usually?). They don't detract from the novel as a whole, however; instead they invite reflection, discussion, and debate.

One of the things I especially like about this novel is its emotional complexity. This is perhaps a darker novel than Dickens fans have come to expect, but there are still laugh-out-loud moments as well as scenes that invite long and deep reflection. And, as in most Dickens novels, there are female characters -- like Lizzie Hexam -- whom you sometimes just want to shake and say, "Shape up!" or "Get a grip!"

This is a novel that completely engaged me on both an intellectual and emotional level. I heartily recommend it. And don't try to speed through it. Go slowly and savor it.

Charles Dickens in writing this book helped us to know about child labor, sanitary conditions, distinctions between the rich and the poor. He also was what I would say our original environmentalist. This book should be on the reading list in our high schools.