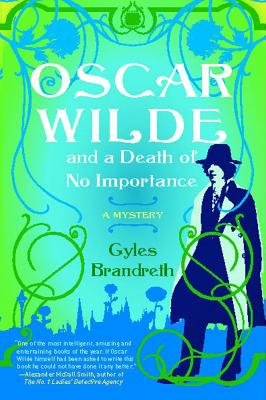 Oscar Wilde and a Death of No Importance

One of Britains premier royal biographers pens the first in a series of fiendishly clever historical murder mysteries, featuring Oscar Wilde as the detective. Read More

One of Britains premier royal biographers pens the first in a series of fiendishly clever historical murder mysteries, featuring Oscar Wilde as the detective. Read Less

Have You Eaten Grandma?: Or, the Life-Saving Importance of Correct Punctuation, Grammar, and Good English

Oscar Wilde and the Vatican Murders

Oscar Wilde and the Murders at Reading Gaol: A Mystery

Captures the Victorian and Edwardian Atmosphere

To me, the book might be called, "Oscar Wilde and a Book of No Importance." The only thing I like about it is the clearly Victorian and Edwardian atmosphere the author is successful in sharing about the time Wilde lived.

I really don't like having real people turned into fictional sleuths. Because Oscar Wilde lived life large (and had a notorious ending), the author must have thought that there were those who would enjoy learning more about this 'larger-than-life' man. However, I walked away with no new knowledge about the inner workings of this gifted writer. The person in the book never seemed real; he was just a caricature of a famous person.

I forced myself to finish this book; hoping it would get better. Wilde's flamboyant style, the easy grace, and other biographical details are all in evidence. However, I know nothing more about what made Oscar Wilde the unique person he was during his lifetime.
Oscar Wilde, using Arthur Conan Doyle's tactics to solve the murders, just didn't work for me. Sherlock Holmes was meticulous in his reasoning, while Oscar Wilde seemed to be too showy to resort to such painstaking efforts.

I was looking for substance; what made Oscar Wilde such a unique person and writer? This book gives examples of Wilde's uniqueness, but no substance or meaning behind his actions.