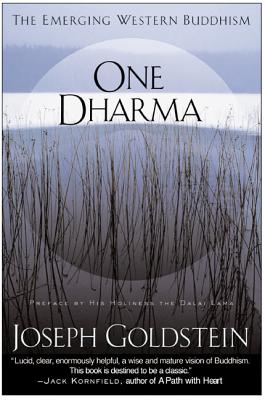 One Dharma: The Emerging Western Buddhism

One of America's foremost Buddhist teachers integrates the disparate but converging teachings of Western traditions to create this definitive guide to the new Buddhism. Read More

One of America's foremost Buddhist teachers integrates the disparate but converging teachings of Western traditions to create this definitive guide to the new Buddhism. Read Less

All Editions of One Dharma: The Emerging Western Buddhism

Seeing That Frees: Meditations on Emptiness and Dependent Arising

Eight Mindful Steps to Happiness: Walking the Path of the Buddha

Lovingkindness: The Revolutionary Art of Happiness

Seeking the Heart of Wisdom: The Path of Insight Meditation

The Dharma Of Freedom

Joseph Goldstein has written an ambitious, short book which attempts to synthesize the wisdom and teachings of various Buddhist traditions and which offers thoughts on the possible future course of Buddhism in the West. The book is also a practitioner's guide and a manual for those setting out on a Buddhist practice.

Each of the components of this book is difficult and important. Joseph Goldstein has valuable things to teach and suggest to the reader about the many questions raised in the book. But I found that the book had a certain lack of focus from trying to do too many things in too brief a compass.
Specifically, Mr. Goldstein's discussion of meditation practice and of Buddhist morality was very well put. It cannot be heard often enough, particularly for those readers new to Buddhism. But the discussion of meditation practice, for me, was not well integrated with the other themes of the book -- an attempt to show what various Buddhist teachings prevalent in the United States have in common and to show how Buddhism may develop in the United States.

The book opens with an eloquent discussion of the growing interest by many people of Buddhism in the United States. It discusses as well the three traditions which probably have received most attention in the West: Theravada, Zen, and Tibetan Buddhism, although Mr. Goldstein is fully aware that there are other traditions as well. With the transmission of the Dharma to the United States, Mr. Goldstein asks what these traditions have in common and how the Westerner is to learn to practice. He offers many stories from his own experience, beginning with his practice in Theravada Buddhism which gradually expanded to an interest in Zen and Tibetan Buddhism. There is an all-to-brief history of Buddhism and its divisions into the Theravada and Mahayana schools. For all the good things Mr. Goldstein has to say about practice, I would have liked to have heard more about this given the theme of the book.

Mr. Goldstein stresses the pragmatic character of the Buddha's teaching with its encompassing purpose of ending suffering. He rightly emphasizes, I think, that this purpose is common to all Buddhist traditions and he suggests as well that practitioners can draw on one or the other of the traditions given their own spiritual needs and progress. In a brief compass, he also contrasts various traditions as being "top-down" on the one hand, emphasizing the pure, radiant character of the mind, or "bottom-up" on the other hand, as in the Theravada tradition, emphasizing the hold of the passions and the fetters and the need to work to purify the mind. Again, I would have liked a fuller treatment of these themes and perhaps less an emphasis on meditation technique. There are many books available which address the latter.

Mr Goldstein emphasizes, rightly, a famous verse from the Dhamamapada,(verse 183) a compilation of verses from the Theravada canon. The verse is "Not to do any evil; to cultivate good, to purify one's mind -- this is the Teaching of the Buddhas."

This verse does indeed sum up the Buddha's teaching in all the schools. Much of Mr. Goldstein's book is a commentary on the verse. But I still was left with the feeling that a more detailed presentation was required to understand Buddhism in the United States.

As the book progresses with the treatments of non-clinging, selflessness, and Nirvana, the differences in the various traditions becomes clear and the book assumes a better focus. There is a good attempt to show in the conclusion of the book how the various traditions of Buddhism are all paths leading to one goal -- the cessation of suffering through the attainment of wisdom. The United States offers the unique possibility of the realization of a "Dharma of Freedom.", Mr Goldstein tells us at the end of the book. It will not be tied to particular schools or debates but rather will offer the hope of freedom from suffering and from clinging for those who choose to enter the path.

"One Dharma" is one of the few books that would be better if it were longer. Too much is left out for the reader to see how the traditions of Buddhism, if only on the surface, differ from each other and how the transmission of Buddhism to the United States promises the opportunity of integrating teachings from the different schools.