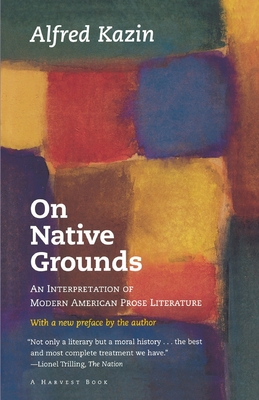 On Native Grounds: An Interpretation of Modern American Prose Literature

A walker in the city.

American Renaissance: Art and Expression in the Age of Emerson and Whitman

A walker in the city.

Kazin write as one who has studied American lit and who wants to share what he found with everyone, not just academics. He wants to show the uniqueness of American writers.
Some of his opinions have changed since the 40's. He came to believe, rightly, that he had undervalued Faulkner. But the book let's us see what is unique about the American experience, how we were no longer Europeans living in the New World. The book is enormously readable. I recommend to people who love American lit and those who to better understand what we have become.

Published in 1942, Alfred Kazin's On Native Grounds is a brilliant study of American literature from the late 1800s to mid-twentieth century, contextualizing that literature within the context of history, culture, and social change from industrialization, science, the Gilded Age, the Great Depression and the proletarian or social protest novel it spawned, to World War II. Edith Wharton, Willa Cather, William Faulkner, Ernest Hemingway, and F. Scott Fitzgerald are among the writers he discusses. One might quibble with some of Kazin's critical evaluations; as with most Eastern critics, he seems to underrate John Steinbeck, while few would probably accept his preference for Thomas Wolfe over Faulkner. Still, by and large, Kazin's criticism is marked by intelligence, learning, fairness, and an acute lucidity. Also recommended is Kazin's 1984 An American Procession in which he does take the full measure of Faulkner's greatness.