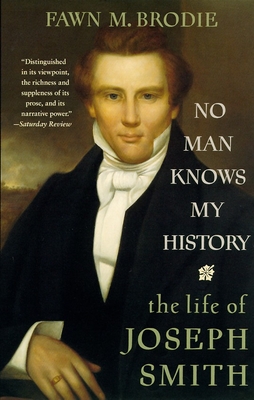 No Man Knows My History: The Life of Joseph Smith

The first paperback edition of the classic biography of the founder of the Mormon church, this book attempts to answer the questions that continue to surround Joseph Smith. Was he a genuine prophet, or a gifted fabulist who became enthralled by the products of his imagination and ended up being martyred for them? 24 pages of photos. Map. Read More

The first paperback edition of the classic biography of the founder of the Mormon church, this book attempts to answer the questions that continue to surround Joseph Smith. Was he a genuine prophet, or a gifted fabulist who became enthralled by the products of his imagination and ended up being martyred for them? 24 pages of photos. Map. Read Less

From Crossbow to H-Bomb, Revised and Enlarged Edition

No man knows my history : The life of Joseph Smith the Mormon prophet.

Joseph Smith and the Beginnings of Mormonism

Leaving the Saints: How I Lost the Mormons and Found My Faith

The book No Man Knows My History by Fawn McKay Brodie, was a more recent updated version, which I did not expect. I purchased the book as a used, in good condition copy. I don't believe my copy has ever been read. It looks brand new, in excellent condition. I particularly like to purchase from Alibris because I seldom have to wait more than a few days, often within a week, for my order to arrive. I am a great bargain hunter, Alibris' prices for books, along with the best postage rates for their customers, I find most satisfying. I always recommend Alibris to friends and family when they are searching for a hard to find or particular title. My adult law student daughter is always thrilled when she finds assorted text books or recommended titles at costs far below local bookstore or school prices. I remind them that I have not yet had an unsatisfactory experience, I am thoroughly pleased with the outcome of a search or purchase from Alibris. I'm always a happy customer.

Who is Joseph Smith?

Fawn Brodie's biography of the controversial founder of the Mormon faith is a beautiful read, but as the reader is drawn into the elegantly-wrought story, the tipping point between Brodie's own faith and doubt emerges as a heart-breaking subtext to what is already an amazing tale of a remarkable American, written with consummate care and scrupulous honesty. America in the 1830s and 40s, when Smith founded his Church, was a crucible for Utopians, but only Smith's religious ideas survived the 19th century to become a commonplace religious movement in the U.S. today. As with any major religious movement, the "reasons why" are really inexplicable; however, there is something in what Joseph Smith said, and how he lived, that left an indelible mark on the country. Brodie does not pull any punches about Smith's uneven career as possible confidence man and dreamer, however, his rise to the status of Latter-day Prophet is truly and well described. So much of the early history of Mormons, and especially the life and times of its founding Prophet, is forgotten, misunderstood, or ignored in the larger tellings of American history, what respected Mormonologist Jan Shipps has called "the donut hole of Western history." Brodie's book illuminates the mysterious early years of a fascinating and uniquely American faith system, and reintegrates Smith's life and times into the larger narrative of Lincoln's election and the opening of the West.

Brodie was a faithful daughter of the Church. In writing this biography - which is remarkable by any standard - she, by virtue of her special status as the beloved daughter of a powerful Church family, had access to documents and accounts no longer generally accessible to historians, it is said. Brodie was excommunicated for writing this book, which was published in 1942 by a "Gentile" or non-Mormon press, and it has been continuously in print since then. Until very recently, Brodie's book remained the gold standard for biographical information on Smith. Today, one may also read Bushman's magnificent biography, "Joseph Smith: Rough Stone Rolling," published in 2005. As more American are wondering how Mormonism became such a force in American life, Brodie's fine and fair biography is a great place to start.