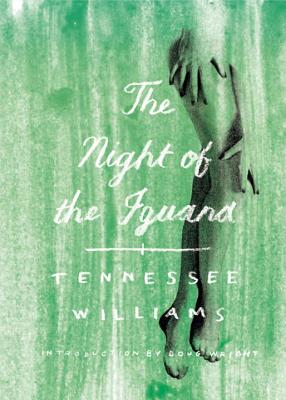 Night of the Iguana

Now published for the first time as a trade paperback with a new introduction and the short story on which it was based. Read More

Now published for the first time as a trade paperback with a new introduction and the short story on which it was based. Read Less

All Editions of Night of the Iguana

The Theatre of Tennessee Williams, Volume I: Battle of Angels, the Glass Menagerie, a Streetcar Named Desire

A View from the Bridge

Death of a Salesman

The Night Of The Iguana

Although he lived and continued to write until 1983, Tennessee Williams' 1961 play "The Night of the Iguana" was to prove his last success on Broadway. Williams painstakingly wrote the play based upon earlier short plays and stories. In the Broadway production, Patrick O'Neal and Margaret Leighton played the lead male and female characters, the Revered Lawrence Shannon and Hannah Jelkes. The venerable Bette Davis who craved for top billing in the show, played the secondary female character, Maxine Faulk. When Davis left the production, Shelly Winters replaced her.

A lengthy play in three acts, "The Night of the Iguana" requires slow, careful reading. The action is less overt and violent than in much of Williams. The play is set in the summer of 1940 in what Williams describes as "a rather rustic and very Bohemian hotel, the Sosta Verde, which, as its name implies, sits on a jungle-covered hilltop overlooking the 'caleta,' or 'morning beach' of Puerto Barrio in Mexico". World War II hangs over the play. The guests at the hotel include a family of Germans on vacation. The head of the household is the president of a firm that manufactures tanks. The family is unabashedly Nazi and follow the progress while on their holiday of the Battle of Britain. They offer largely comic interludes to the internal, private drama of the play.

Williams wrote that the theme of this play is "how to live beyond despair and still live." In Shannon, Hannah Jelkes, and Mrs Faulke as well the play shows tormented lonely people "at the end of their rope" who strive to make a human connection and to find meaning in their lives. The iguana in the title of the play shares the condition of the characters. A group of boys have caught a large lizard and tied it by the neck under the hotel with the goal of killing and eating it the next day. At a climactic moment, Shannon recognizes the suffering iguana as one of God's creatures and cuts it loose. The play's human characters strive to free themselves from the ropes that bind them.

Shannon is an ordained minister who lost the only pulpit he ever held when he had sex with a young girl and then gave a blustering sermon in church in which he denied the existence of a God who was a "senile delinquent" or an "angry, petulant old man". For ten years he has been giving tours in various parts of the world while suffering from alcoholism and frequent mental breakdowns. He is leading tours to Mexico for a small Texas bus company and his final group, consisting of 11 unmarried women from a Texas religious college for women, refuse to travel further with him after he has had sex with a 16-year old girl who accompanies the women. The women refuse to stay at the Sosta Verde and with Mrs. Faulke, the proprietor. The lusty but frustrated Mrs Faulke has just been widowed and she has designs on Shannon, who had been a friend of her husband. Hannah Jelkes comes to the hotel shortly after Shannon in the company of her grandfather, 97. Hannah, 40 and never married, is an artist and her grandfather is a poet. There is an immediate, unstated attraction between Hannah and Shannon.

The play develops slowly. Williams explores the past lives of the primary characters and their attempts at finding peace. Shannon has a severe emotional breakdown when he loses his job as a tour guide. He and Hannah have a lengthy and close emotional evening of talk but cannot reach physical intimacy. Shannon stays on as a companion to Mrs Faulke to comfort her, help with the hotel, and satisfy its female guests. Hannah must deal with being alone.

Hannah is probably the key figure in the play and an unusual character for Williams. She is from New England rather than from the South. She is also measured, restrained, and philosophical. "Accept whatever situation you cannot improve" Hannah advises Shannon during the evening of their emotional intimacy. The play explores spiritual themes. It appears to reject the "senile delinquent" view of God (a caricature of monotheism) in favor of a more spiritual Eastern form of pantheism, perhaps, or stoicism.

John Lahr's new biography, "Tennessee Williams: Mad Pilgrimage of the Flesh" (2014) puts "The Night of the Iguana" into the context of Williams' life and offers insights into the writing and editing of the play, its themes and production, and the difficulties of working with Bette Davis. I learned a great deal from Lahr about Williams and about "The Night of the Iguana." The play is more about the universal human feelings of loneliness, despair, and hope than it is about the specifics of Williams' own difficult life.

Set during WWII, a defrocked priest has taken up giving guided tours of Mexico. Much to the dismay of his church group clients, he books them into the seaside resort hotel of an old friend. Also staying at the hotel are a dying poet and his daughter who has come along to care for her aging father. The defrocked priest has a drinking problem and some major issues with God and organized religion. One fateful night, the priest is tied up in a hamock, liked the captured iguana that is being fattened for a future meal, and overcoming his DTs, the priest reveals his reasons for having been defrocked.
Despite all the other drama going on at the hotel, it is the priest's reasons for leaving the church that are the theme of the play. And, he has some very interesting ideas about God and orgainized religion.