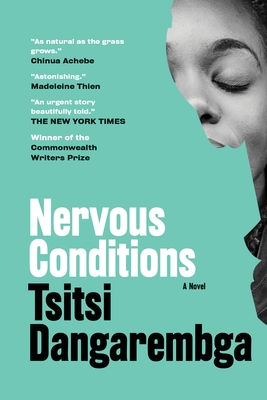 FROM THE BOOKER PRIZE SHORTLISTED AUTHOR OF THIS MOURNABLE BODY, ONE OF THE BBC'S 100 WOMEN FOR 2020 'UNFORGETTABLE' Alice Walker 'THIS IS THE BOOK WE'VE BEEN WAITING FOR' Doris Lessing 'A UNIQUE AND VALUABLE BOOK.' Booklist 'AN ABSORBING PAGE-TURNER' Bloomsbury Review 'A MASTERPIECE' Madeleine Thien 'ARRESTING' Kwame Anthony Appiah Two decades before Zimbabwe would win independence and ended white minority rule, thirteen-year-old Tambudzai Sigauke embarks on her education. On her shoulders rest the economic hopes of her ... Read More

FROM THE BOOKER PRIZE SHORTLISTED AUTHOR OF THIS MOURNABLE BODY, ONE OF THE BBC'S 100 WOMEN FOR 2020 'UNFORGETTABLE' Alice Walker 'THIS IS THE BOOK WE'VE BEEN WAITING FOR' Doris Lessing 'A UNIQUE AND VALUABLE BOOK.' Booklist 'AN ABSORBING PAGE-TURNER' Bloomsbury Review 'A MASTERPIECE' Madeleine Thien 'ARRESTING' Kwame Anthony Appiah Two decades before Zimbabwe would win independence and ended white minority rule, thirteen-year-old Tambudzai Sigauke embarks on her education. On her shoulders rest the economic hopes of her parents, siblings, and extended family, and within her burns the desire for independence. A timeless coming-of-age tale, and a powerful exploration of cultural imperialism, Nervous Conditions charts Tambu's journey to personhood in a nation that is also emerging. 'With its searing observations, devastating exploration of the state of "not being", wicked humour and astonishing immersion into the mind of a young woman growing up and growing old before her time, the novel is a masterpiece.' Madelein Thien Read Less

All Editions of Nervous Conditions

A Grain of Wheat

The Joys of Motherhood

So long a letter

A Rhodesian Coming Of Age Novel

Set in the late 1960's -- 1970's, Tsitsi Dangarembga's 1988 novel "Nervous Conditions" (1988) tells the story of an adolescent girl growing up in rural Rhodesia (Zimbabwe). The author is a Zimbabwe native who earned a medical degree and lived in Germany and England before returning to her native country. She has become a full-time writer of novels, plays, and films. "Nervous Conditions" is the first book of a projected trilogy. The second book "The Book of Not" was published in 2006.

Written in an appealingly simple and understated way, "Nervous Conditions" explores issues of cultural and gender relationships in colonial Rhodesia. It is a first-person narrative in the voice of Tambu, a grown woman whose age is not given, recounting and reflecting upon the events of her youth beginning in 1968 when Tambu was 13 and continuing for three years. At the end of the book, Tambu has received the rare opportunity to study at a Catholic girls' school that admits a small number of native African girls. But Tambu has already seen enough to know that the experience will not give her the life that she wants. She is apparently rejecting assimilation to Western culture in favor of the local life in which she was raised.

The story pivots upon the death of Tambu's older brother Niamo who was attending a missionary school. With Niamo's death, a place opened up for Tambu, an intelligent and ambitious young woman, to attend the school under the sponsorship of her wealthy and British-educated uncle, Babamukura, who is the headmaster as well as the head of the family. Babamukara and his wife Maiguru have a daughter, Nyasha, who is Tambu's age and is also highly intelligent. Nyasha has become British in outlook from the five years her parents spent studying in London. Tambu has been raised on a poor rural commune that Dangarembga describes in detail. Her father, Babamukra's brother, is poor and unambitious while his wife is subservient but tries to do her best for her children.

Tambu describes her story as "the story of four women whom I loved, and our men". (p.204) The four women her mother, her mother's younger pregnant sister, Lucia, her uncle's wife Maiguru and Nyasha, their daughter. Gender is a pervasive theme of the book as Tambu and each of the four women are portrayed as caught in and responding to a native Rhodesian society dominated by men which allows little room for the growth and autonomy of women. Tambu is beset af first by her brother and her father and their understanding of the role of women in the family. She continues to struggle with gender expectations as she attends the missionary school. Her friend Nyasha with her exposure to British culture contends and literally fights with her father while Nyaka's educated mother must also remain in her educated, domineering husband's shadow. Lucia, pregnant under questionable circumstances, is also dependent upon Babamukura. Each of the four women in this novel develop in varying degrees the ability to speak for themselves and, so to speak, to fight back.

The other primary theme of this book is colonialism as Dangarembaba examines the relationship between the British and the native Rhodesians. Tambu's uncle Babamukra is the pivotal character. He has had the rare opportunity to study in England at the graduate level and to become respected and prosperous. He is the head of the family and it shows as he demands obeisance from his poorer relations, especially the women. He and his family have worked to become acculturated in the ways of the West. Throughout the book, it becomes increasingly apparent that he and his family are patronized and diminished by their British overlords. Dangarenrga gives great attention to the missionary school system which, at its best, was open only to a small number of natives while carefully restricting the opportunities available to the selected few. The tension between British and native values together with gender relations works to ruin the life of Tambu's friend Nyaka and to radically change Tambu's own outlook on life as she comes to see the value of her native culture and to reject that of the British. The tension between the gender-related aspect of the story and the colonialist-related aspect of it is not entirely resolved.

Most of the time books with a heavily ideological component do not work for me as novels. This book is an exception. Dangaremrga's book moves quickly and her characters are portrayed sympathetically. The protagonists in the story come to life as people rather than as counters in the service on an ideological position. Tambu's voice and the choices she must make are portrayed in a convincing way. I learned much from this book's portrayal of mid-20th Century Rhodesia. Thus I found that Dangarembga successfully combined ideology with storytelling and character development in this book to create a successful, moving novel.