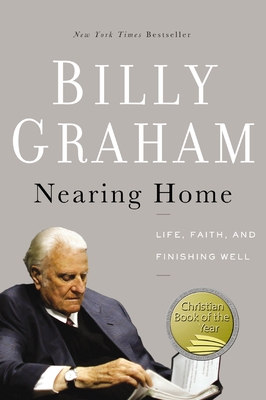 The man of faithNnow in his 90sNexplores the challenges of aging while gleaning foundational truths from Scripture. He invites readers to journey with him as he considers the golden years while anticipating the hope of being reunited with his wife, Ruth, in heaven. Read More

The man of faithNnow in his 90sNexplores the challenges of aging while gleaning foundational truths from Scripture. He invites readers to journey with him as he considers the golden years while anticipating the hope of being reunited with his wife, Ruth, in heaven. Read Less

All Editions of Nearing Home: Life, Faith, and Finishing Well

Hope for Each Day: Words of Wisdom and Faith

Heaven Is for Real: A Little Boy's Astounding Story of His Trip to Heaven and Back

The Journey: How to Live by Faith in an Uncertain World

The evangelist Billy Graham (1918 -- February 21, 2018) is a person I have admired from a distance for many years for his passion, commitment to his religion, oratory, and integrity in tempting circumstances. He is a revered public figure who has offered counsel and spiritual guidance to twelve presidents, including President Obama. My own religious convictions are not those of Billy Graham. I am largely a secularist, but I have learned from Judaism, my birth religion, and from Buddhism which I have studied for many years, and from some Christian mystics, among other sources. I am not sure I could articulate a creed, and I doubt that Billy Graham would fully approve. I doubt that I would have selected Graham's new book, "Nearing Home" to read on my own, but when the book was offered through the Amazon Vine program, it struck a chord. I wanted to revisit Graham. It is also valuable to hear a perspective on important matters that is not necessarily one's own.

The book interested me because it addresses themes of aging, retirement, and death. I am 64, (2011) retired, and wanted to hear what Graham had to say. Graham brings personal knowledge as well as religious teaching to bear upon his subject. He retired in 2005 from the rigors of the evangelical ministry in which he had engaged for more than 50 years. In 2007 his wife of 63 years, Ruth, died. At the age of 92, Graham has become increasingly frail and his activities curtailed severely. He is candid about the resultant frustration and pain.

Graham's book, written in anticipation of his own death, is itself a example of how to live well with aging. His book offers much insight and advice which appears to come from Graham's life and to be sincerely felt. Graham has much to say about making the decision to retire and finding valuable, productive ways to use one's time. He discusses important, mundane matters such as the need for estate planning and making a will, to living with pain, to serving as an example to one's family and to young people. He stresses the possibility and need for continued spiritual growth throughout life. The book is eloquent with much common sense and a good degree of uncommon wisdom.

With his years of public speaking and impassioned oratory, Graham writes simply and well. Much of the book comes from his own experience, while he also makes good use of news stories, anecdotes, and popular culture. There is a great deal of Biblical quotation. It may be superfluous to say, but I am impressed with Graham's close knowledge of the Bible, both Old and New Testaments. He quotes with ease, and his Scriptural references invariably are on point and illuminate what he is trying to say.

Non-sectarian wisdom and Christian teaching are inextricably bound together in this book. Graham generally begins his discussions with observations that will appeal to readers irrespective of their religious beliefs. His advice then typically takes a distinctively evangelical Christian turn. Examples abound on every page, but here is a short paragraph that impressed me. Graham is discussing "Leaving a Legacy" by which he means acting in one's old age in a manner which will inspire younger people. Under the heading "Our Greatest Hope" Graham writes:

Here Graham poses an important question to which he provides an excellent answer in his second sentence. He then pivots to explain his answer in Christian terms. A reader could accept the second sentence from Graham while offering his or her own spiritual understanding in a third sentence, which might or might not agree with Graham's. A secularist, Jewish person, or Buddhist, for example might want to put spiritual beliefs in their own terms. As I read the book, I thought Graham said some very broad based valuable things that could teach people of diverse religious persuasions. I was uncomfortable with some of the explicitly evangelical portions of the teaching, which suggest that Graham's way to God might be the only way. The book becomes more theological in tone as it proceeds, with the final chapter devoted to a depiction of Heaven followed by a call to the reader to come forward and accept Jesus as one's Savior. This mirrors the great evangelist's procedures at his many religious crusades. Graham can be accepted, if not necessarily followed, in speaking in his own religious voice.

I was reminded in reading this book of many books by the Dalai Lama. Like Graham, the Dalai Lama has a worldwide following and is revered by many people who are not followers of the path of Tibetan Buddhism. And both these spiritual leaders offer insights that may prove valuable to those outside, respectively, Tibetan Buddhism or fundamentalist Christianity. A major difference is that the Dalai Lama does not ask his readers, many of whom are willing to do so, to become Buddhists. Rather, he asks them to follow seriously their own religious path. Graham cannot avoid the voice of proselytizing. His teachings are valuable but the teachings of the Dalai Lama are probably closer to me.

I enjoyed reading this book and learning Billy Graham's thoughts on aging and on living the latter parts of one's life with grace, dignity, and purpose. The book will appeal mostly to Graham's followers, but I am pleased I was given the opportunity to read it.