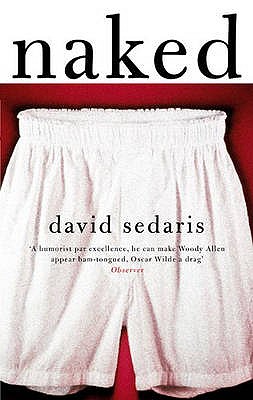 A riotous collection of memoirs which explores the absurd hilarity of modern life and creates a wickedly incisive portrait of an all-too-familiar world. It takes Sedaris from his humiliating bout with obsessive behaviour in 'A Plague of Tics' to the title story, where he is finally forced to face his naked self in the company of lunatics. At this soulful and moving moment, he brushes cigarette ashes from his pubic hair and wonders what it all means. This remarkable journey into his own life follows a path of self-effacement ... Read More

A riotous collection of memoirs which explores the absurd hilarity of modern life and creates a wickedly incisive portrait of an all-too-familiar world. It takes Sedaris from his humiliating bout with obsessive behaviour in 'A Plague of Tics' to the title story, where he is finally forced to face his naked self in the company of lunatics. At this soulful and moving moment, he brushes cigarette ashes from his pubic hair and wonders what it all means. This remarkable journey into his own life follows a path of self-effacement and a lifelong search for identity leaving himself both under suspicion and over dressed. Read Less

2001, Phoenix (an Imprint of The Orion Publishing Group Ltd ), London

All Editions of Naked

The Best of Me

Me Talk Pretty One Day

A Heartbreaking Work of Staggering Genius

Dress Your Family in Corduroy and Denim

Screaming funny book. One of the best I have ever read!

Have finally gotten around to reading Sedaris. Have no negative comments to make, and I understand his appeal; just not my cup of tea. Doubt I will read more of him.

Parts of this book were amusing, but overall, I didn't think it was great.

Okay...I just figured it out! I have been trying to figure out why so many people rate this book so highly. This book is just like Dumb and Dumber. If you like the movie Dumb and Dumber you will probably like this book. I like some sophistication/intelligence with my humor. I really, really, hated that movie because they want you to laugh at the lowest common denominator. I don't do that, I like someone to know something, be something, understand something in order to make me laugh. Ha...there you go. David Sedaris is writing to the Dumb and Dumber crowd. I feel light now, happy. I love when something finally makes sense.

So far the subject matter is, uh, not virtuous, lovely, or of good report (if you know what I mean). The language is embarrassing. I have gotten some laughs out of some parts, but the fact that I feel like I have to wash my hands and brain after every time I pick it up means those laughs are too emotionally expensive!

I will write more if it comes to me. Often after I sit on something for awhile it becomes better because I forget the gross parts. I will let you know if my opinion changes.

I really don't know what to think of this book. I just read two chapters that were only funny a few times, however they were insightful and almost, dare I say, touching. My heart broke for the kid as he went to camp and worried about being gay. I thought his goals for being an actor and his willingness to work hard at it was uplifting. His realization that his mom was the best actress of all was smile inducing. Dinah, the Christmas whore just left me with my jaw on the floor. This author I disliked so handily 80 pages ago just endured himself to me. The compassion of his sister and mother was my favorite. I thought he, throughout the book, has been able to balance his young perception of people with the realization that his perception was inaccurate very well, crazy well, really.

I am finding this book oddly touching and thoughtful. I no longer think I will throw the book away when I am finished. It isn't a book I would ever keep in my house, but I have a friend that, I believe, would enjoy it very much. I think I will try to send the book to Chris. I have read his blog a couple of times and while it is way too gritty for me to enjoy it does remind me of Sedaris somehow. I won't read this book again and can't really say I like it. I am afraid that if I gave it three stars someone else might think it would be smart to read it. I can't and won't recommend it, but I would be lying to say I am sorry I have read it.

I was touched by a few things in this book. Sedaris does have an interesting outlook on life and the people around him. I have a great appreciation for being surrounded by people who use clean language. The nasty language was the hardest part for me. It is hard to blame the author for all the sexual odd moments if he was really writing about his own life experiences. Again, that left me with an appreciation for the people I have run into and had as friends throughout my life. I was most touched by his story about his mother's death. I felt like he wrote candidly and with a refreshing frankness. I don't think it would be the same for me or my family, but I could totally see how it could work that way for others.

I would never read this book again. I can't imagine why I would ever pick up a book by Sedaris again. I can't give it any thumbs up but I don't regret reading it.