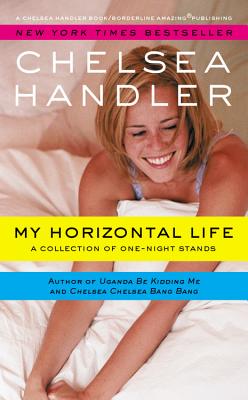 My Horizontal Life: A Collection of One-Night Stands

In this raucous collection of true-life stories, actress and comedian Chelsea Handler recounts her time spent in the social trenches with that wild, strange, irresistible, and often gratifying beast: the one-night stand. Read More

In this raucous collection of true-life stories, actress and comedian Chelsea Handler recounts her time spent in the social trenches with that wild, strange, irresistible, and often gratifying beast: the one-night stand. Read Less

All Editions of My Horizontal Life: A Collection of One-Night Stands

Are You There, Vodka? It's Me, Chelsea

Uganda Be Kidding Me

Eat, Pray, Love: One Woman's Search for Everything Across Italy, India and Indonesia

Lies That Chelsea Handler Told Me: By Chelsea's Family, Friends and Other Victims

This book had me laughing out loud the entire time. It is alot of dirty humor about one night stands, and Chelsea couldnt be a better story teller. I highly recommend this book, after this book I went on to read her other books too which were also very funny, but this one is my favorite.

Anecdotal account of Chelsea's frequent sexual encounters in her late teens and 20's. Situational humor that many of us experienced but didn't commit to writing. Quick read.

i purchased this book for my 18 yr old daughter for christmas. she loved it and has shared it with friends & family

Chelsea Handler is a foul-mouthed, drunken, egotistical, politically incorrect slut. She's also hilarious. This "collection of one-night stands" delves into Chelsea's exploits as she, um, dates a male stripper, wakes up in bed with a midget with an outsized penis, acts as a beard--named Beulah--at her gay friend Nathan's prep school reunion, and gets drunk in more situations than you can shake a swizzle stick at.

Think Sarah Vowell meets Sarah Silverman. Think David Sedaris before he got off the meth. However you think of it, you'll laugh your butt off (even if you're sometimes a little ashamed of yourself for doing so) as you read these essays.