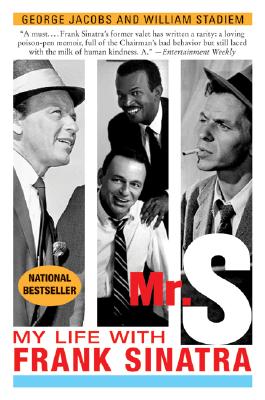 All Editions of Mr. S: My Life with Frank Sinatra

Been There, Done That

My Father's Daughter: A Memoir

Memories Are Made of This: Dean Martin Through His Daughter's Eyes

His Way: The Unauthorized Biography of Frank Sinatra

Mr. Jacobs gives the most comprehensive insights into Frank Sinatra yet. He was there at the centre of Sinatra's life as his valet for 15 years, from 1953 to 1968, years when Sinatra was becoming The Chairman of the Board, the Rat Pack leader and, the most accomplished popular songster ever, after a career that was almost wiped out. So it was rather a shock to find the derogatory terms used when referring to women. Maybe in that era, these terms were commonplace among men when together.
Mr. Jacobs' life was rich with interesting situations - squiring Ava Gardner around, travelling the world, mixing with the greats. Mr. Jacobs seems to have retained a fond feeling for his old boss, even after he was coldly cut out of Sinatra's life, ostensibly for dancing with Mia Farrow so enthusiastically at one of the popular nightclubs.
In the last chapter, we are privy to the author's withdrawal symptoms after the 15 years of excitement and glamour, and the havoc the job caused in Mr. Jacobs' family life.
There was one last meeting between George Jacobs and Frank Sinatra which could have
been put straight into a movie for its poignancy.
But be warned! Any feminists might be upset about the treatment of women in the book.