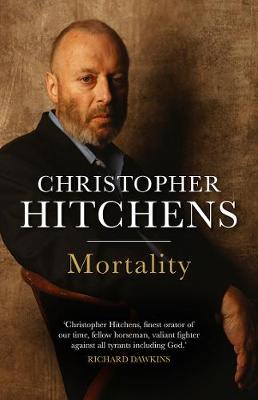 The starting point of this book was when Christopher Hitchens found he was being deported 'from the country of the well across the stark frontier that marks off the land of malady'. Over the next year he underwent the brutal gamut of cancer treatment, enduring huge levels of suffering and eventually losing the power of speech. Mortality is at once an unsparingly honest account of the ravages of his disease and the climax of a lifetime's work of fierce debate and peerless prose. In this confrontation with mortality Hitchens ... Read More

The starting point of this book was when Christopher Hitchens found he was being deported 'from the country of the well across the stark frontier that marks off the land of malady'. Over the next year he underwent the brutal gamut of cancer treatment, enduring huge levels of suffering and eventually losing the power of speech. Mortality is at once an unsparingly honest account of the ravages of his disease and the climax of a lifetime's work of fierce debate and peerless prose. In this confrontation with mortality Hitchens writes eloquently of his fear of losing the ability to write, of the joy of conversation, of the torture of chemotherapy . . . and of the very meaning of life. 'Hitchens is at his lucid best, encyclopedic in his referencing of politics and literature while at the same time unstinting in his attention to medical detail. He faces the process of a painful and premature death with stoic good humour, a wry grin, and a wistful farewell to all that was wondrous in life.' The Adelaide Review 'A moving and deeply civilised work--the last meditations of a man who never stopped trying to think beyond cant and cliche, even in the direst of circumstances . . . Hitchens faced death the way he faced life: with wit, a hard head, a supreme talent for language and a bracing lack of fear. He reminds you that a writer armed with these resources can leave behind works as wise as many a holy text . . .' The Weekend Australian 'A remarkable conversation with death--and death always has the last word . . . He took the scenic route home and gave us a guided tour. Highly recommended.' South Coast Register 'Christopher Hitchens, finest orator of our time, fellow horseman, valiant fighter against all tyrants including God.' Richard Dawkins Read Less

All Editions of Mortality

The Portable Atheist: Essential Readings for the Nonbeliever

The Missionary Position: Mother Teresa in Theory and Practice

Take away the body of work, take away the name, and this book would stand on its own as a testament of how to face your own demise. Hitchens uses words in ways no one else can to make sailcloth. With dignity he describes the failures of the body that, in his own words "betrayed" him. In characteristic Hitchens fashion he mocks himself in ways his most eloquent and voracious detractors only wish they could. I imagine Hitchens banging in fury on his keyboard as he wrote. But, I know he didn't. This is a measured, rational, poignant, and humorous description of what it feels like to hurtle at breakneck speed toward inevitability. All the while losing taken-for-granted, and under-appreciated faculties. He takes every opportunity to note the humor in what is happening to him. But when he describes the loss of his voice, by degrees, in painstaking detail, there isn't any room for laughter. Still, he builds the ship, raises the sails and steers her by the windows that peer into a decline he is brave enough to share. With his realization that he doesn't *have* a body, so much as he *is* one, even for someone who considers himself rational, I found this a disquieting juxtaposition of the mind becoming slave to its vehicle--something of a worker's revolution against management.
Hitchens never waivers on his stance with regard to religion, though. Even as he is mocked by a slew of critics, he mocks back at a deity dispossessed of a more creative mind with which to kill him in more grandiose fashion.

In the end, Hitchens brings forward a universal truth: death. No matter anyone's feelings about the man, or what they may believe happens after we die; we are all going to do it. None of us will do it as well, though. Tie yourself to the rigging of Hitchens' ship and let him sail you to the edge of the falls.

In a scene from my all time favourite film, Woody Allen?s Manhattan, Woody starts to recount those things that make life worth living. I have played this game with friends many times over the years. My list of things that make life worth living is; (family and friends are a given), Woody Allen of course, the film Manhattan, Virginia Woolf?s ?Mrs Dalloway, Salvador Dali?s ?Christ of St John on the Cross?, Charleston Farmhouse in Sussex, Monty Python?s ?Life of Brian?, Morecambe and Wise, Peacock Butterflies, David Hockney?s ?A Bigger Splash?, Hitchcock?s ?Rear Window?, The Edinburgh Book Festival, David Sylvian, Philip Glass etc. Over the years there have been a few additions. Christopher Hitchens became one of those additions.
I have been putting off the reading of Mortality for sometime knowing full well the subject matter contained within its pages; not only the last words of a superlative orator and writer but details of his horrendous illness, oesophageal cancer. My cowardice probably also stems from the knowledge that I am less than ten years away from the age that Christopher Hitchens died, 62.
As to be expected the writing is not self-piteous, there is no element of self-aggrandizement in any of its 106 pages. Mr Hitchens style of writing makes one want to go around pulping every pencil, drain every pen and smash ones keyboard knowing that you will probably never write as well as he did. However, I am sure Christopher Hitchens would want you to buy new pencils, refill those pens and repair that keyboard and attempt to equal or better his writing.
In ?Mortality?, as to be expected, religion rears its ugly head in the form of monotheists letting Mr Hitchens know that he deserves to die, that God has struck him down in vengeance. Christopher Hitchens in his usual pithy and direct manner surmised that God was rather mundane and routine in his vengeance to give him oesophageal cancer which was highly likely to occur anyway due to his heavy smoking.
My honorific review can never fully convey the extent of how wonderful the book is without falling into the quicksand of cliché. So, I will simply end this review with a direct and succinct command: READ THIS BOOK!