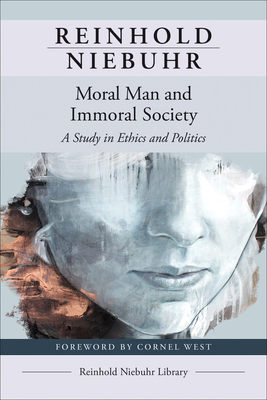 Niebuhr argues that using moral persuasion and shaming to affect the behavior of such collectives as corporations and nation states is fruitless, as these groups will inevitably seek to promote only their self-interest. He calls for a realistic assessment of group behavior and enumerates how individual morality can mitigate social immorality. Read More

Niebuhr argues that using moral persuasion and shaming to affect the behavior of such collectives as corporations and nation states is fruitless, as these groups will inevitably seek to promote only their self-interest. He calls for a realistic assessment of group behavior and enumerates how individual morality can mitigate social immorality. Read Less

All Editions of Moral Man and Immoral Society

Moral Man and Immoral Society: A Study in Ethics and Politics

Reinhold Niebuhr: Major Works on Religion and Politics (Loa #263): Leaves from the Notebook of a Tamed Cynic / Moral Man and Immoral Society / The Children of Light and the Children of Darkness / The Irony of American History

Leaves from the Notebook of a Tamed Cynic

Leaves from the Notebook of a Tamed Cynic

The responsible self; an essay in Christian moral philosophy.

Reinhold Niebuhr On Ethics And Politics

Reinhold Niebuhr (1892 -- 1971) was an American Protestant theologian and social thinker whose works continue to be read. The Library of America is about to publish a volume of Niebuhr's writing, including four books and a collection of essays, sermons and other works which has been provided to me for review. I am in the process of reading and reviewing the four books separately before reviewing the LOA volume.

At least since Plato's "Republic", philosophers have studied the relationship between individual and political morality. Niebuhr's 1932 book," Moral Man and Immoral Society: A Study in Ethics and Politics" is a complex, difficult book dealing with this difficult question. Niebuhr wrote the book with the events of his time in full view: the Great Depression, the increasingly faltering peace after WW I, and the rise of Soviet communism. Although these historical events pervade the book, Niebuhr believed its theme was broader and that his basic conclusion was reinforced by the events that occurred after it was written. Upon republication of the book in 1960, Niebuhr wrote:

" I consented to the republication of the book because I still believe that the central thesis of the book is important and I am still committed to it. The central thesis was, and is, that the Liberal Movement both religious and secular seemed to be unconscious of the basic difference between the morality of individuals and the morality of collectives, whether races, classes, or nations. This difference ought not to make for a moral cynicism, that is, the belief that the collective must simply follow its own interests. But if the difference is real, as I think it is, it refutes many still prevalent moralistic approaches to the political order. ... I have changed my mind about many things, but I am inclined to think that all of our contemporary experience validates rather than refutes the basic thesis of this volume."

The title of the book, and Niebuhr's comments in 1960, offer a succinct summary of the argument of the book that individual morality and political morality differ. He finds the source of the difference in his Augustinian view of human nature, which emphasizes the human tendency to evil and to selfishness. Niebuhr argues that individuals, with effort and insight, can work towards a goal of disinterested, unselfish, and rational conduct. This process, very difficult on an individual level, becomes more difficult and virtually impossible as the size of the group grows to include the modern nation and the international community of nations. Why? Because the tendencies toward selfishness, self-interest, and lack of nuanced reflection become much harder to see and to root out as the group becomes larger and more organized. Among other things, the interest of the nation becomes virtually identical to the interest of its most powerful group, which in the modern world tends to be the group with the greatest degree of economic power and control of assets. The interests of the nation, thus, have an inherent selfishness or, in religious terms, sinfulness to them. They reflect the bias of the wealthy, and the interests of the poor, the dispossessed, and the racial minorities are marginalized or left out. The standards of personal morality and unselfishness that apply to individuals thus don't transfer to groups. The working class poor and segregated African Americans, for example, must develop a cohesiveness to work against the forces that hold them down and that marginalize them. Niebuhr does not categorically rule out violence in the achievement of this end, although he is skeptical of its effect in most instances. He also is pessimistic about the possibilities for fully peaceful, painless change within the political system. He praises, for some circumstances, the program of non-violent, but coercive resistance utilized by Gandhi, and he recommends its use by African Americans.

The overall tone of the book is pragmatic but pessimistic. The book is directed at the too easy optimism of religious idealists, who see a turn to religion as the solution to social ills, and at the optimism and secular pragmatism of philosophers such as John Dewey, who make too large claims for the ability of the social sciences and for experimentation to solve deeply-rooted social ills. At one point, Niebuhr says the following about the proper goal of political action and morality.

" A rational society will probably place a greater emphasis upon the ends and purposes for which coercion is used than upon the elimination of coercion and conflict. It will justify coercion if it is obviously in the service of a rationally acceptable social end, and condemn its use when it is in the service of momentary passions. The conclusion which has been forced upon us again and again in these pages is that equality, or to be a little more qualified, that equal justice is the most rational ultimate objective for society. If this conclusion is correct, a social conflict which aims at greater equality has a moral justification which must be denied to efforts which aim at the perpetuation of privilege."

The argument of the book develops slowly, and cumulatively over ten dense chapters. The book's Introduction and final chapter offer relatively brief summations of the course of the argument. The book relies on philosophical, historical, and contemporary public events sources and displays great erudition and possibly too broad a scope. The role that religion plays in Niebuhr's analysis is, like much else, less than clear. The third chapter of the book, "The Religious Resources of the Individual for Social Living" offers an insightful look at the nature of the religious life. I thought it the best writing in the book but was unclear on how it related to the argument of the volume. The opening chapters of the book explore individual ethics and communal politics. In the middle chapters, Niebuhr examines the political morality of nations, privileged groups, and the proletarian and dispossessed classes. The concluding chapters of the book examine the various options the disposed of society have to gain justice for themselves while the final chapter returns again to the basic distinction between individual morality and politics.

It is a rare book which makes a reader step back and think. I found much of this difficult and daunting study, "Moral Man and Immoral Society" troublesome but deeply provocative. It made me think about ethical and political questions from a perspective different than the perspective I tend to bring to them. That is the mark of a worthwhile book. While I find part of this book troublesome, I understand the influence it has had and want to think through further the issues that it raises.