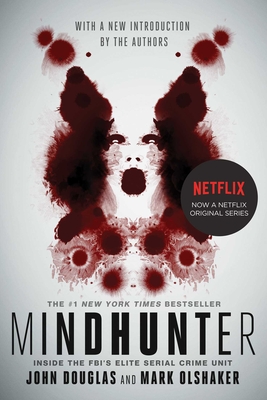 The author heads the FBI Elite Serial Crime Unit and is highly experienced in the field of serial killers. Drawing on a study he conducted of more than 150 imprisoned killers, the book explores the psychology and motives in this area of crime. Read More

The author heads the FBI Elite Serial Crime Unit and is highly experienced in the field of serial killers. Drawing on a study he conducted of more than 150 imprisoned killers, the book explores the psychology and motives in this area of crime. Read Less

All Editions of Mindhunter: Inside the FBI's Elite Serial Crime Unit

The Cases That Haunt Us: From Jack the Ripper to Jonbenet Ramsey, the FBI's Legendary Mindhunter Unravels the Mysteries That Won't Go Away

The Anatomy of Motive: The FBI's Legendary Mindhunter Explores the Key to Understanding and Catching Violent Criminals

The Unknown Darkness: Profiling the Predators Among Us

Whoever Fights Monsters: My Twenty Years Tracking Serial Killers for the FBI

Obsession: The FBI's Legendary Profiler Probes the Psyches of Killers, Rapists, Stalkers and Their Victims and Tells How to Fight Back

The book is about the FBI's first serial crime unit and its research of personality development of the worst criminals. It is a good basis if you are into character analysis. I read Hannibal next with a greater understanding of all the "sick" characters in it. But as John Douglas persuaded me, these people are incorrigible. . . .even if I do feel sympathy with how they were raised.

Having read 'Journey into Darkness' by the same author, I had a fair idea of what to expect when I purchased "Mindhunter". For the most part I was not disappointed. John Douglas makes it all look so very easy until you remember he is writing in hindsight and I must admit that the smugness with which he compares his initial profiles with the eventual convicted murderer is a bit of a turnoff, offset only by the bleak appreciation of the monostrosity of these crimes and the devastating impact on the families of the victims. One wonders how many facets of a given prediction John Douglas doesnt report on if he gets that wrong!

Be that as it may, the book is commendable in not dwelling more than is absolutely necessary to explain the crime that was committed and how elements of that crime served to identify the killer later. Douglas has a tendency to take off on a tangent from one case to another, but this is pretty much the way an ordinary conversation goes, so no great grief there. Perhaps the single thing that did irritate me a bit was the gratuitous personal details that made parts of the book sound like a resume - but then again in the same way that Douglas says one cannot understand a crime without understanding a victimology, perhaps he feels that one cannot understand how the crime was solved without knowing a bit about the profiler.

All in all very readable - not as thorough or as realistic as the Green River Killer or Citizen X, but easier to follow in terms of small detail kept to a minimum for the sake of the main plot.