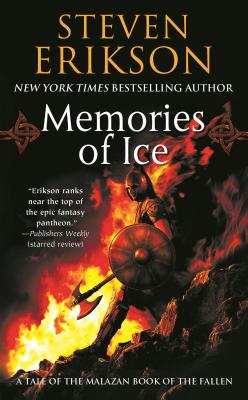 Marking the return of many characters from "Gardens of the Moon" and introducing a host of remarkable new players, this novel is both a momentous new chapter in Erikson's magnificent epic fantasy and a triumph of storytelling. Read More

Marking the return of many characters from "Gardens of the Moon" and introducing a host of remarkable new players, this novel is both a momentous new chapter in Erikson's magnificent epic fantasy and a triumph of storytelling. Read Less

All Editions of Memories of Ice

Gardens of the Moon

Return of the Crimson Guard

good for the price

The book was in good shape and fine reading for the price.

I like heroic fantasy, David Gemmell, Tad Williams and tolkein are right up there in my faves list, this is in my opinion better than any fantasy novel I have ever read. Firstly it is part of a large sequence of books, there will be ten when it's finished, and this is number three, but don't let that put you off as it is eminently readable as a standalone story.
Like all the best fantasy it is filled with memorable people and creatures and is, on the surface at least, an epic battle of good versus evil. The story centres around an alliance of once enemies who join forces to combat a monstrous evil intent on the conquest of the continent and then the world. The pannion domin is like nothing they've ever faced before with a huge seemingly unstoppable army, at the heart of which is the tenescowri, a peasant army that must fight in order to survive as their only sustenance is the bodies of their dead victims. They are supported by professional soldiers and ancient undead creatures of incredible power and fury.
Against them is an outlaw army from an expansionist empire and a hodge podge collection of nomads, warlords and mages. All these forces meet at the doomed city of Capustan, protected only by small mercenary company.
This book has some of the most graphic and imaginative battle scenes I have ever read, with ideas that could turn the stomach if they weren't handled so well by the author. Eriksons characterisation is sufficient to make you care about people you've only just been introduced to and want to know what happens to them.
I read this story then rushed out to buy the rest of the books in this sequence and am currently re-reading them all they are that good. As a stand alone story it really could be the best heroic fantasy novel I've ever read, as part of a sequence it is awesome.