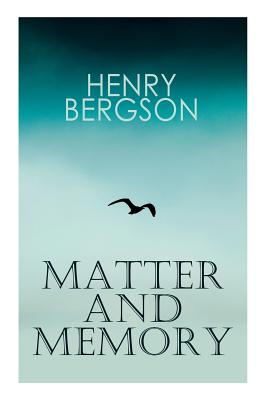 One of the major works of an important modem philosopher, Matter and Memory investigates the autonomous yet interconnected planes formed by matter and perception on the one hand and memory and time on the other. Read More

One of the major works of an important modem philosopher, Matter and Memory investigates the autonomous yet interconnected planes formed by matter and perception on the one hand and memory and time on the other. Read Less

All Editions of Matter and Memory

Time and Free Will: An Essay on the Immediate Data of Consciousness

Laughter: An Essay on the Meaning of the Comic

The Creative Mind: An Introduction to Metaphysics

An Introduction to Metaphysics

I have been fortunate to participate in an online philosophy reading group on Henri Bergson (1859 -- 1941). With the guidance of both an experienced scholar and teacher and a new PhD who wrote a dissertation on Bergson, our group read "Time and Free Will" (1889) followed by "Matter and Memory" (1896). Following a holiday break, we will study Bergson's most famous work, "Creative Evolution" (1907). Bergson was for a time a surprisingly popular, even faddish, philosopher but fell into obscurity even during the latter part of his life. He received the 1927 Nobel Prize for Literature.

"Matter and Memory" is an extraordinarily difficult book. It is in turn both beautifully written and insightful and maddingly opaque. Bergson states his them at the outset: "This book affirms the reality of spirit and the reality of matter and tries to determine the relationship of one to the other by the study of a definite example, that of memory." The broad goal of the book is to challenge the scientific, naturalistic worldview that was prevalent in Bergson's time and remains so today. He moved and impressed many readers from many walks of life but the difficulty is in the detail. Bergson proceeded by examining the realist -- idealist dichotomy in philosophy. He tried to find shared assumptions underlying both sides of this dichotomy and then to undermine these shared assumptions by taking a different path. The result was a process oriented philosophy with ties to the work of Bergson's friend, William James, and a little later to the work of Alfred North Whitehead.

The book consists of an Introduction, four lengthy chapters, and a Summary and Conclusion. The approach of the book is more concentric than linear. Each part says essentially the same thing but in different ways and with different levels of detail. It tries to explain the nature of reality and the relationship of mind and spirit. It examines and redefines the natures of perception and the nature of memory. Bergson vehemently denies that perception and memory are located "in" the brain and nervous system but sees instead the brain as part of a long processual chain. He distinguishes and relates "pure" perception and "pure memory" and how they work together and differ. He denies that memory is a weaker form of perception stored in and a function of the brain. He sees memory as part of a spiritual flow that informs and shapes perception. Perception is of images shaped by memory. It functions spatially through the body and is invariably directed to the solving of practical problems ranging from where to find food through the intricacies of science. Perception is goal-directed, active, and forward-looking and occurs in space. Memory is contemplative, reflective, and is within the continued durational flow of time. There is a tension of varying degrees between the two in every experience.

Bergson offers a variety of approaches in developing his position. These range from argument, analysis of experience, discussion of the scientific findings of his day, psychology, drawings and illustrations, metaphor, introspection, and intuition. The approaches are mixed together. It is easy to remember the eloquent, beautiful, lucid passages at the expense of the sections of the book that are difficult.

In the first part of the book, Bergson tries to get beyond idealism and realism by developing his philosophy of images and the basis for his discussion of the relationship between action and reflection. In the second and for me most difficult section of the book Bergson uses scientific findings of his day to argue against a materialistic, epiphenomenal understanding of thought and memory. The third part of the book was, for me, philosophically the most interesting and clearest written, difficult though it is. It discusses the nature of memory and perception, both "pure" -- for themselves and mixed with each other as they are in experience. It concerns the relationship and interweaving of spirit and body. An important part of this chapter is developed through Bergson's use and discussion of a figure of an inverted cone. We spent substantial time in our online class discussing this figure. The fourth part of the book draws broad philosophical conclusions about the nature of reality as continuous, flowing, temporal and interconnected, with perceptions of discrete objects in space only an limited and specialized part of this flow. Among other things, Bergson makes arguments founded upon and attempting to refute the famous paradoxes about space and motion of Zeno.

I read the book more than once, followed the discussions in our class and read some good secondary source material. There is some beautifully evocative material in "Matter and Memory" but I overall am confused about what to make of the book. It was valuable to study the book in the company of other interested readers. With all the popularity that Bergson once had, this is not a book for casual reading.