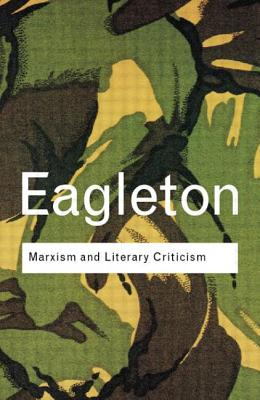 "Far and away the best short introduction to Marxist criticism (both history and problems) which I have seen."--Fredric R. Jameson Read More

"Far and away the best short introduction to Marxist criticism (both history and problems) which I have seen."--Fredric R. Jameson Read Less

All Editions of Marxism and Literary Criticism

Why Marx Was Right

The Idea of Culture

A Comprehensive Overview of Marxist Theory...

Terry Eagleton?s 'Marxism and Literary Criticism' is a short, and therefore accessible, introduction to the principle theories of Marxist thought with regard to literary criticism; highlighting throughout the individual thinkers from Marx and Engels to Lenin and Trotsky thru to Walter Benjamin and Bertolt Brecht.

Eagleton explores the various concepts of key Marxist critics including Marx himself, noting also the limited nature that all criticism necessarily faces, and purposing also in this book to prove that Marxist Criticism is more than merely a ?sociology of Literature? arguing that Marxist Criticism ??has its significant, if not central, role to play in the transformation of human societies.? and with a subtle sense of irony admits ? necessarily including himself:

"Critics are not just analysts of texts; they are also (usually) academics hired by the state to prepare students ideologically for their functions within capitalist society."

It is an easy to read preparatory guide that provides a full bibliography for those wanting to explore the depths and varieties of a Marxist approach to literary criticism by reading the Marxist Critics themselves.

Despite being thirty years old the book ? having been first published in 1976 ? still remains relevant in that it highlights the relevance of Marxist thought to our contemporary Twenty-First century. It could be asked, as Eagleton does, how is Marxism relevant other than as a historical point of view with the collapse of the soviet union, the increasing industrialization of China, and the fall of the Berlin Wall? Eagleton's response is to write in the new 2002 Preface:

"Marx and Engels envisaged a world in which globalized market forces reigned supreme, careless of the human damage they inflicted, and in which the gap between rich and poor had widened intolerably."

Today the gap between the rich and the poor is still increasing and many in developing countries are forced to subsist on less than a dollar a day, while those at the helm of the capitalist globalization are filling their gold lined pockets with an immeasurable and indecent profit. As long as the world remains in such a crisis, then Marx will be relevant; and as long as Marx is relevant, his thought on artistic and literary production remains contemporary. Although Marxism has ultimately failed in political practice throughout history; it has, Eagleton proclaims, as a theoretical tool for the study of literature, still much to offer.

'Marxism and Literary Criticism' is therefore essential reading for those who require an initial introduction to this particular branch of criticism; a comprehensive overview of Marxist theory: thus, it proves to be a useful stepping stone towards the reading of the Marxist literary criticism as a whole.