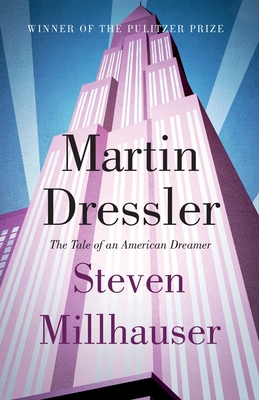 Martin Dressler: The Tale of an American Dreamer

Martin Dressler is the son of cigar maker, born in late 19th century New York. As Martin approaches manhood, it is rapidly clear that his ambitions stretch far further than inheriting his father's shop, as he moves first to take a job in a hotel, then to open a restaurant, and rapidly ascends to become a builder of hotels of his own. He is a classic entrepreneur, a young man who has the audacity to make his dreams ' and the American Dream ' come true on the grandest possible scale. But when Martin sets out to build the ... Read More

Martin Dressler is the son of cigar maker, born in late 19th century New York. As Martin approaches manhood, it is rapidly clear that his ambitions stretch far further than inheriting his father's shop, as he moves first to take a job in a hotel, then to open a restaurant, and rapidly ascends to become a builder of hotels of his own. He is a classic entrepreneur, a young man who has the audacity to make his dreams ' and the American Dream ' come true on the grandest possible scale. But when Martin sets out to build the Grand Cosmos, a hotel that rivals Mervyn Peake's Gormenghast in its scale, and aims to rival the world itself in its scope, this mesmerising novel finally exposes the ambiguity of the American dream and the perils and wonder of human ambition and human imagination. Read Less

1999, Phoenix (an Imprint of The Orion Publishing Group Ltd ), London

All Editions of Martin Dressler: The Tale of an American Dreamer

The Knife Thrower: And Other Stories

Edwin Mullhouse: The Life and Death of an American Writer 1943-1954 by Jeffrey Cartwright

We Others: New and Selected Stories

A Summons to Memphis

Steven Millhauser's 1996 novel, "Martin Dressler: The Tale of an American Dreamer" is a fable about the allure and limitations of the American dream. Set in a rapidly-developing New York City at the beginning of the Twentieth Century and recounted in an oracular style by an omniscient narrative voice, the book tells the story of "a man named Martin Dressler, a shopkeeper's son, who rose from modest beginnings to a height of dreamlike good fortune." As the story develops Martin "dreamed his dream" and was at length "lucky enough to do what few people even dare to imagine: he satisfied his heart's desire." But, as might be expected, the connivance of the gods "brings everything to ruin at the end."

Martin is in part a Horatio Alger figure. He works to pull himself up by his bootstraps, to seize the main chance, and to make his own way. Martin is also a loner and a dreamer. He spends hours lost in his own thoughts and images. From his youth, Martin walks the streets of a developing New York looking at the Brooklyn Bridge, the harbor, Central Park, the undeveloped areas on the City's West Side, and the still uncompleted elevated railway and subway. Martin tries to envision what could be rather than merely see what is before his eyes. Millhauser's book explores the tensions between Martin's businessman's realism and his idealistic dreaming.

As a young boy, Martin helps his immigrant father, Otto, in the small family cigar and tobacco shop on Broadway. Even as a boy, Martin is full of suggestions for expanding the store's trade. Otto reluctantly accepts his son's small suggestions while continuing to manage the store in the accustomed manner. This is not to be Martin's way.

Young Martin soon works his way into a job as a bellhop at the Vanderlyn, an old,ornate hotel down the street from the cigar store. Martin is punctilious in serving the needs of the hotel's guests. In the rooms and corridors of the Vanderlyn, Martin gets his first visions of an artistic life, in figures of a shadowy troupe of actors and his first hint of sexuality from a hotel guest, a frustrated, middle-aged woman.

Martin opportunistically secures the lease for and revitalizes the run-down cigar stand in the Vanderlyn's lobby. He rises within the Vanderlyn management to become second in command, but he is dissatisfied with his prospects. He develops a chain of urban restaurants called the "Metropolitan" which achieve large commercial success. Still dissatisfied, Martin sells his restaurants to purchase and refurbish the staid old Vanderlyn Hotel, which under its previous owners had not adopted to modern conditions.

With an all-consuming but unfocused ambition, Martin then builds and operates three additional hotels, the Dressler, the New Dressler, and the Grand Cosmos which are progressively larger and ever more unrealistically outlandish. Millhauser describes the hotels in long passages of descriptive intentionally unbelievable prose. The first two of Martin's hotels succeed while the final hubris-filled Grand Cosmos, an extraordinary world within a world, brings Martin down.

Martin's business ventures, with their mixture of realism and dream, and lack of fixed purpose, are mirrored in his relationships with women. As a bellhop at the Vanderlyn, the occasional hotel guest offers him the possibility of sexual adventure. Martin moves on to brothels and to hotel maids before becoming friendly with a mysterious family of three obscure women: Margaret Vernon, a widow, and her two daughters, the beautiful but ghostlike and recessive Caroline and her plain but energetic and insightful younger sister Emmeline. Martin is attracted to and marries Caroline but, with his bride's frigidity and ignorance, spends his wedding night with a maid at the hotel. Emmeline, with barely concealed anger, becomes his business confidant. The sisters become jealous and virtually interchangeable. Martin loses them both.

Martin dreams and strives, but he does not know himself or what he wants. Before Martin's marriage to Caroline, Emmeline confronts him with his lack of direction in the middle of apparent success. "But what do you want, Martin? What is it you actually want?" she asks. When Martin evasively replies, "Oh everything." Emmaline presses her question: "But I don't think you do, not in the usual way. In a way you don't want anything. You don't care if you're rich. Suppose you were rich, really rich. What would you do then?" Only after the double failure of the Grand Cosmos and of his marriage to Caroline does Martin admit to himself that he had "dreamed the wrong dream" in his unexamined pursuit of the world-substituting hotel complex and in his lack of attention to his own desires, both in his life work and in his need for love.

Millhauser's novel compares the limitations of the American dream, with its emphasis on materialism, endless economic growth, and ceaseless, thoughtless activity, with the dream's still unrealized potential. With his quest to realize his dream and the products of his imagination, unformed as they may be, Martin Dressler is the true American artist. At one point, as Martin walks the city streets alone, he has one of his many imaginative visions: "Martin imagined a city with trains in the air and trains under the ground, a fierce and magical city of moving iron, while along the trembling avenues there rose, in the clashing air, higher and higher, still buildings." Later, after making a success of one of his smaller hotels, Martin has an epiphany leading to his disastrous final venture in which he sees that "deep under the earth, in darkness impenetrable, an immense dynamo was humming." The vision of the dynamo, and the contrast between a simple past and a complex, industrialized future which pervades this book, owes a great deal to Henry Adams' similar dichotomy of modern life between the traditional and the new in his chapter the "Virgin and the Dynamo" from "The Education of Henry Adams."

Millhauser's writing is precise and evocatively surrealistic at the same time. Millhauser evokes as do few other writings the sights, sounds, and character of New York City at the turn of the 20th Century. He portrays the city looking back from the standpoint of the late 20th Century, with its size, eclecticism, impersonality and, all too often, individual loneliness. The writing also has a dreamlike quality as the various characters in the story, especially Caroline and Emmeline whose names themselves invite confusion, seem to meld into and become interchangeable with one another. Martin's tale moves between hard headed commercialism and realism and the flights of fancy and outrageous impossibility.

"Martin Dressler" offers a thoughtful, troubled look at the United States and at its dreamers. The book holds out an important potential of American life in the form of self-knowledge and growth of understanding combined with the ability to articulate and to pursue a dream. Wisdom comes to Martin at the end, financially ruined and alone sitting in a park on an early Spring day, even though it comes late. In its exploration of American life and self-knowledge, "Martin Dressler"" offers a philosophical portrayal of what the American dream may become. The book is rare in the manner that seriousness and whimsy are combined. As a meditation on American life, "Martin Dressler" received the 1997 Pulitzer Prize for fiction and made what is likely to be a lasting contribution to American literature.

This book was absolutely wonderful--a great read for ages 13 and up (might be a little premature for 12 year olds, since it contains some sexual content.) Definitely worth your time. It is overall, an extremely well-written book.