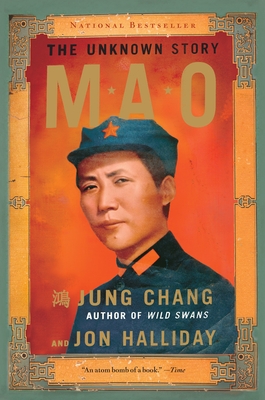 Jung Chang's "Wild Swans" was an extraordinary bestseller throughout the world, selling more than 10 million copies and reaching a wider readership than any other book about China. Now she and her husband Jon Halliday have written a groundbreaking biography of Mao Tse-tung. Based on a decade of research, and on interviews with many of Mao's close circle in China who have never talked before - and with virtually everyone outside China who had significant dealings with him - this is the most authoritative life of Mao ever ... Read More

Jung Chang's "Wild Swans" was an extraordinary bestseller throughout the world, selling more than 10 million copies and reaching a wider readership than any other book about China. Now she and her husband Jon Halliday have written a groundbreaking biography of Mao Tse-tung. Based on a decade of research, and on interviews with many of Mao's close circle in China who have never talked before - and with virtually everyone outside China who had significant dealings with him - this is the most authoritative life of Mao ever written. It is full of startling revelations, exploding the myth of the Long March, and showing a completely unknown Mao: he was not driven by idealism or ideology; his intimate and intricate relationship with Stalin went back to the 1920s, ultimately bringing him to power; he welcomed Japanese occupation of much of China; and he schemed, poisoned and blackmailed to get his way. After Mao conquered China in 1949, his secret goal was to dominate the world. In chasing this dream he caused the deaths of 38 million people in the greatest famine in history. Combining meticulous history with the story-telling style of "Wild Swans", this biography makes immediate Mao's roller-coaster life, as he intrigued and fought every step of the way to force through his unpopular decisions. The reader enters the shadowy chambers of Mao's court, and eavesdrops on the drama in its hidden recesses. Mao's character and the enormity of his behaviour towards his wives, mistresses and children are unveiled for the first time. This is an entirely fresh look at Mao in both content and approach. It will astonish historians and the general reader alike. Read Less

All Editions of Mao: The Unknown Story

Life and Death in Shanghai

The Search for Modern China

It refers to details of his life no previews biographers dared to write...

A critical review of Mao, The BIG Red Book

Were there ever an antithesis of Mao?s ?Little Red Book,? it is perhaps ?Mao: The Unknown Story,? which itself could be dubbed the ?Big Red Book,? although it does not portend to spout ideaology.
For some, this will present a daunting read at some 800+ pages, but well over 150 of those pages are dedicated to notes, source material, bibliographical information and index, which will knock it down to a respectable 630 or so pages. Such extensive source material lends a great deal more credibility to the information than what critical commentators are likely to produce in kind. If only a fraction of ?Mao: The Unknown Story? is true it would arguably reveal the world?s most despotic, self indulgent, murderous and coldhearted regimes if not personalities.
Jung Chang and Jon Halliday have compiled an exhaustive resource of the Mao story that spans his entire life and career. The book is broken down into many small chapters that frequently overlap each other to focus on pivotal events that otherwise would be lost in a simultaneous treatment. These small chapters make it easy reading for Western readers who might otherwise bog down in sometimes troublesome Chinese names.
Mao?s apparent disdain for his own people and culture, which China can easily claim unparalleled richness, amounts to atrocities which are equally unparalleled in world history.
?Mao: The Unknown Story,? depicts Mao as an opportunistic, self absorbed, womanizing bully, who truly and rightfully feared his people nearly as much as they feared him. Mao himself is not depicted as a deep thinking philosopher, but more of a conniving political saboteur who ruled with less of an iron fist than an obedient pack of Rottweilers.
The books astounding casualty figures are as troubling as the numbers of surviving Chinese who tolerated the brutality. Certainly Mao?s carnage could have easily been matched by Chiang Kai-shek had the shoe been on another foot. There is considerable evidence that Chiang could have been as at least as much of a tyrant as Mao.
The fact that so many Chinese bought into the Mao phenomenon and personality cult is a testament to the psychosis of group think and mob mentality on the grandest scale. Perhaps one might argue that to rule a nation of so many people one must deny individuality or at least sacrifice it for the ?stability? China?s Communist Party seems to have enjoyed.
There is little doubt that the curtain Mao pulled China behind remains reluctant to show the west much of the reality that it experiences.
Diplomatically, the lessons of ?Mao: The Unknown Story,? are useful in analyzing the modern world and protecting against future despotic regimes while helping to recognize existing ones.
Insightful, wide-ranging, and well organized. Biased?-certainly, accurate?-perhaps, interesting?-at least.
REVIEW EVERY BOOK YOU READ, AUTHORS AND READERS DESERVE YOUR OPINIONS TOO!