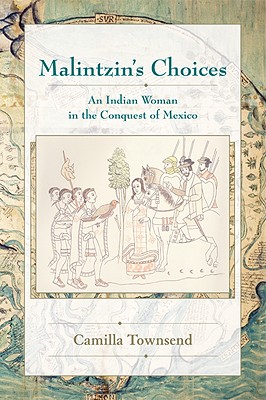 Malintzin's Choices: An Indian Woman in the Conquest of Mexico

The complicated life of the real woman who came to be known as La Malinche. Read More

The complicated life of the real woman who came to be known as La Malinche. Read Less

Pocahontas and the Powhatan Dilemma: The American Portraits Series

Pocahontas and the Powhatan Dilemma

Of the People: A History of the United States, Volume 2: Since 1865, with Sources

Of the People: A History of the United States, Volume 1: To 1877, with Sources

The Broken Spears: The Aztec Account of the Conquest of Mexico

Camilla Townsend sings Marina's life. So little is known about her, yet, so much is said about her. She stands as the symbol of traitor, this slave who found her chance to escape captivity and establish herself with a powerful group... against another powerful group; one that was probably an enemy to her original family.
By our standards her life was short, sad and many times brutal. It's sadder yet that the modern country sprung in the land of her deeds so hates her, for reasons that have little to do with the reality of her life and a lot to do with the dichotomy of being "mestizo," mixed race.
I knew so little about her, I did not even realize she had been sold as a slave when a young girl to the Chontal Maya. I didn't know she had been given as a slave and a whore and a war prize by the same maya some ten years later to rough, angry violent men who threatened her owners.
I had no idea how she became Cortés' interpreter or what happened to her afterward. And I did not know she bore two children or that she married in a catholic ceremony one of Cortés greater captains.
Townsend's careful tracing of her footsteps is echoed in another book, Anna Lanyon's "Malinche's Conquest."
Neither author attempts to write a fictional character as true, both seek what formed her, what her place and her life was like, what documents exist.
Deeply readable as a book or for scholarly purposes; Camilla Townsend's production of this book is a complete tour de force and I am enchanted to add it to my library.