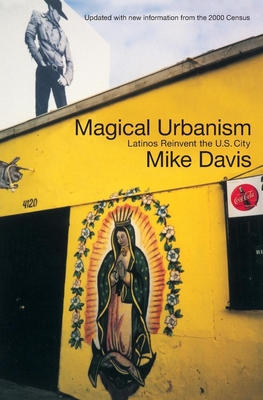 The author of "Ecology of Fear" now focuses on the great drama of how Latinosare attempting to translate their urban demographic ascendancy into effectivesocial power. New in paperback. Read More

The author of "Ecology of Fear" now focuses on the great drama of how Latinosare attempting to translate their urban demographic ascendancy into effectivesocial power. New in paperback. Read Less

All Editions of Magical Urbanism: Latinos Reinvent the Us City

City of Quartz: Excavating the Future in Los Angeles

Late Victorian Holocausts: El Nino Famines and the Making of the Third World

Prisoners of the American Dream: Politics and Economy in the History of the Us Working Class

Occupied America: A History of Chicanos

Hellfire Nation: The Politics of Sin in American History

by James A Morone

Harvest of Empire: A History of Latinos in America

Dead Cities: And Other Tales

City of Quartz: Excavating the Future in Los Angeles

In this book Davis examines the far reaching changes in the US brought about by a massive influx of Latin American migrants during the last two decades. Pushed by Central American civil wars and the economic dislocations of Nafta, there has been a demographic sea - change in US urban centres where Latinos now constitute the largest minorities and come into conflict with economic and political structures consigning them to the bottom of the social pyramid, ' underneath the underdog' in the words of Charles Mingus.
The survey Davis gives of their experiences in the US is unremittingly bleak:- economically trapped in low tech manufacturing, basic service and construction work at best, or else forced to rely on informal activities to survive; dismissed as educational failures; victims of daily racist violence and discrimination; and politically attacked by the anti-immigrant lobby.
However the Latino insertion is not simply a passive one. Their have been extensive informal efforts to engage in urban renewal by Latino communities; and promising developments in building solidarity between Latinos and Blacks within the trade union movement around Los Angeles. Necessarily so, as the destructive alternative dynamic of competition between ethnic monioritires has been all too evident in urban big city politics of NYC, LA and Chicago.
Davis also gives consideration to events south of the border. Here a novel process of transnational migration is underway, Mexican communities establishing a foothold on both sides of the border to secure their livelihoods through their seasonal labouring. Equally new are the socio-economic patterns and institutions in the maquiladora zone, where cross-border divisions of labour and urban infrastructures unfold to service this export processing, free trade enclave.
In terms of political solutions, Davis places his hopes on the 'Latino - labour' alliance underway in the US. There is no parallel agency identified as operating on the Mexican side - a curious omission, insofar as Davis is familiar with the work of David Bacon, who has chronicled extensively the birth of a cross-border trade union movement and new independent forces in the Mexican labour movement. I would therefore recommend reading his book 'The Children of Nafta' as a complement to Davis's survey.