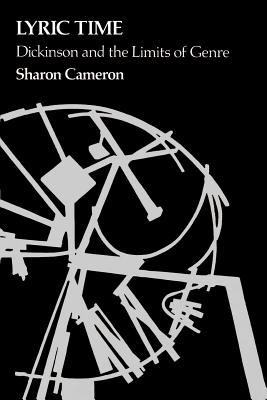 Lyric Time: Dickinson and the Limits of Genre

"Lyric Time" offers a detailed critical reading of Emily Dickinson, a particularly difficult poet, an analysis of the dominance of temporal structures and concerns in the body of her poetry, and finally, an important original contribution to a theory of the lyric. Lightning Print On Demand Title Read More

"Lyric Time" offers a detailed critical reading of Emily Dickinson, a particularly difficult poet, an analysis of the dominance of temporal structures and concerns in the body of her poetry, and finally, an important original contribution to a theory of the lyric. Lightning Print On Demand Title Read Less

All Editions of Lyric Time: Dickinson and the Limits of Genre

Experience and Faith: The Late-Romantic Imagination of Emily Dickinson

Dickinson and the Boundaries of Feminist Theory

Sharon Cameron?s Lyric Time is a classic study of Emily Dickinson?s poetry. In a number of chapters analysing some of ED?s lyrics and poetry by others, it elucidates themes such as naming, rage, representation and death, language and mourning, and time, and ends with a chapter considering the lyric more widely.

I find this work a competent discussion of some of ED?s poems and certainly anyone who reads if will get a flavour of what ED?s is like, but I find that the tone of the work is wrong.

I find, and others have found this too, that the most striking feature of ED?s life and work is that she is one of the best example of what it is like to a be pure poet. ED, because she was able to, retreated into solitude in her life to concentrate on what might be called a poetic existence. The extent to which she was able to do this rare amongst poets, and an index of this the state of her poetry. Many people have reacted to her poetry by asserting that it is fragmentary, unfinished, full of ?mistakes? and bafflingly hard to understand. My interpretation of her poetry is that she was so purely a poet that she left a great deal of it in what might be called its original state, a private mental short-hand version that most poets would have later tidied up for publication and made more explicable at the price of losing some original inspiration.

People who read Cameron?s book will be introduced to the poetic world of ED, but will also be exposed to the author?s implicit attitude that ED didn?t really know what she was doing in the poetry (itself no more than a more sophisticated version of the older ?laughing at the eccentric spinster attitude? in ED criticism). As Cameron diagnoses there is plenty of existential terror, grief and even rage in ED?s poetry, but Cameron misses the humour and the courage of ED?s poetry and above all ?the achieve of, the mastery? of it.

This attitude, for me, ruins not only Cameron?s analysis of ED?s poetry, but her thoughts on the lyric generally, which become merely a post-structural diagnosis of absence. The slant that Cameron takes on post-structuralism is a very Christian one, stressing the absence at the heart of the lyric (ED?s lyrics and the lyric generally). There is no doubt that ED?s thought is firmly rooted in Christianity, but her scheme of thought is one which encompasses absence and is not, ultimately, troubled by it. I prefer Dickinsonianity to Cameron?s version of post-structuralism.

In summary I would recommend this work to ED specialists, but I?d say most people would get more out of simply reading ED?s Collected Poems for themselves.