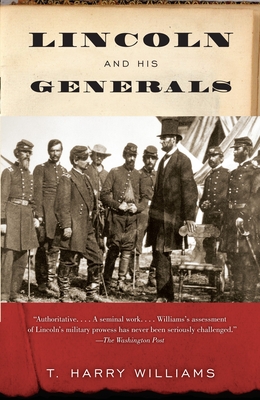 Lincoln and His Generals

Offers a portrait of President Lincoln as commander-in-chief of the Union forces during the Civil War and his emergence as a master strategist. Read More

Offers a portrait of President Lincoln as commander-in-chief of the Union forces during the Civil War and his emergence as a master strategist. Read Less

All Editions of Lincoln and His Generals

Hayes of the Twenty-Third: The Civil War Volunteer Officer

April 1865: The Month That Saved America

A stillness at Appomattox.

Williams?s book does a good job of presenting Lincoln's command problem during the entire Civil War. The general tone of the book is that each general chosen had their good and bad points. It delves in to the issue of who will lead the army of the north. Lincoln is working two ends of a candle. He has specific ideas concerning strategy, but is willing to leave the tactics to the commanders. He is also waging a political battle as well. Some of his decisions are based on political reasons not military. This caused many problems for him. Then Grant arrives on the scene and Lincoln has found his man for the job.
Williams?s book is easy to read, easy to follow and is excellently cited with a wealth of primary sources.