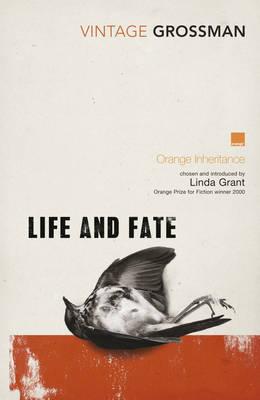 Set during the Battle of Stalingrad, this powerful and deeply moving work of fiction depicts a world torn apart by war and ideological tyranny. "Novels like . . . Life and Fate eclipse almost all that passes for serious fiction in the West today".--George Steiner. Read More

Set during the Battle of Stalingrad, this powerful and deeply moving work of fiction depicts a world torn apart by war and ideological tyranny. "Novels like . . . Life and Fate eclipse almost all that passes for serious fiction in the West today".--George Steiner. Read Less

All Editions of Life and Fate

The Road: Stories, Journalism, and Essays

Bloodlands: Europe Between Hitler and Stalin

I am having to break up the reading of 'Life and Fate'. Knowing that it is based on Vasily Grossman's real life experience it is dreadful to know the horrific lives and deaths of so many people at the hands of Hitlers Germans, and Joseph Stalin's tyranny. I do not read the book at bed time, and have read 'A walk in the Woods' by Bill Bryson during my first break from Life and Fate. I am now reading Enid Blyton's 'Up the Faraway Tree' before going back in to 'Life and Fate'.

This book was arrested by the KGB while the author was allowed to remain free. However copies had been smuggled abroad. It presents Soviet Communism as being little different to Nazism. Grossman intercuts between scenes in a gulag and a concentration camp. Grossman was a war reporter with the Soviet 'Red Star' newspaper, so he knows what he is talking about. The opening scenes of Stalingrad ablaze are unforgettable. I found the German former nanny being denounced as an enemy agent -and her pet cat killed-so that someone could take her apartment as it had an extra room very reminiscent of what family members told me about the Second World War. British POWs spilling the beans about a radio to the Germans so that they could have cigaretttes, chocolate or just get into their captors' good books. Parts of it could have done with a literary editor but it was written in secret and has a few rough edges here and there, in as much as one can tell in translation.

I came to this novel with the assistance of Athony Beevor's 'Stalingrad', though could be enjoyed without it.Following the complexity of the narrative of the family relationships is difficult but it draws you in to a deeply human tale of the effects of war on individuals and society. At times so moving it almost becomes unbearable.This is a book I had to resist the temptation to finish in one sitting. Truly worth your time

This great book is my favorite historical novel. Its scope and power allow the reader to fully understand the fact that Russian Communism and German National Socialism were little more than ugly, feuding brothers, struggling for power.

One of great novels to come out of WWII. Based around battle of Stalingrad and families involved. Incredible insight into Soviet State and Fascism. Long read but worth it.