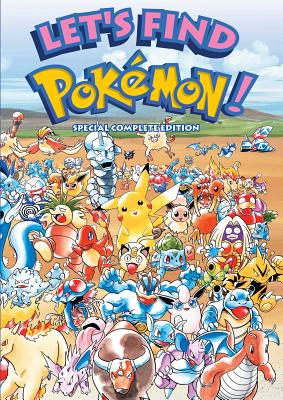 Looking for Pokemon characters? There's plenty hiding--150 in all--in a large-formatted book providing hours of fun and excitement for Pokemon fans as they search through a mirage of busy, colorful scenes for the lovable characters. Read More

Looking for Pokemon characters? There's plenty hiding--150 in all--in a large-formatted book providing hours of fun and excitement for Pokemon fans as they search through a mirage of busy, colorful scenes for the lovable characters. Read Less

All Editions of Let's Find Pokemon!

How to Draw Pokemon

This book was ordered for my Grandson, who is an avid collector of Pokemon cards. He found this book very insightful and was so happy when he received it that he slept with the book under his pillow.

If you like Pokemon and searching books (such as Where's Waldo or I Spy), you'll be happy with this.The pages are large and each one has something else to do, in addition to the searching. They show you a picture of what you're looking for on each page and, I would have to say, it's a little bit easier than the books mentioned above because the images are clear and a little larger (Waldo is often fuzzy and barely recognizable and I Spy is very dark, for instance), but it will still take some time. There are also characters to look for throughout the entire book.

This would probably not be good for the car, unless you want to keep the reading lights on, but it's great around the house when they need something to do. There are other activities toward the back of the book as well, some suitable for older children too, because of the level of difficulty, so it's unlikely they will be bored. It has been a big hit in my house.

Obviously, this is for Pokemon fans. There isn't really an introduction to the concept, so they might be confused by the whole topic, if not already familiar. The only reason I don't give it five stars though is because it's not terribly original, but still well done.