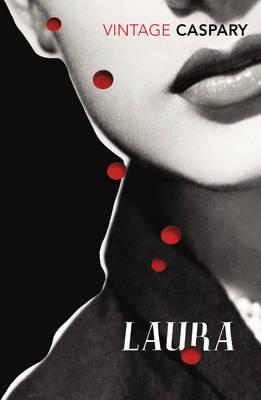 In the doorway of an elegant New York apartment, blood seeps over silk negligee, over polished wood floors and plush carpet: a beautiful young woman lies dead, her face disfigured by a single gun shot. But who was Laura? What power did she hold over the very different men in her life? How does her portrait bewitch even Mark McPherson, the hard-bitten detective assigned to find her murderer? One stormy night, Mark's investigation takes an unexpected turn... Read More

In the doorway of an elegant New York apartment, blood seeps over silk negligee, over polished wood floors and plush carpet: a beautiful young woman lies dead, her face disfigured by a single gun shot. But who was Laura? What power did she hold over the very different men in her life? How does her portrait bewitch even Mark McPherson, the hard-bitten detective assigned to find her murderer? One stormy night, Mark's investigation takes an unexpected turn... Read Less

All Editions of Laura

The Secrets of Grown-Ups

The Man Who Loved His Wife

by Dorothy B. Hughes

Laura In The Library Of America

The Library of America has released a two-volume box set, "Women Crime Writers" which includes eight suspense novels written by women, with four books from the 1940's and four books from the 1950's. The collection opens with Vera Caspary's "Laura" published in 1942-1943. Otto Preminger's eponymous 1945 film has become famous and has overshadowed the book. But Caspary's novel is worth reading in its own right. Sarah Weinman, the editor of the LOA volumes, made an inspired choice by opening the collection with "Laura".

"Laura" is a complex multi-dimensional novel set in New York City in the early 1940s. Pigeonholing literature can be deceiving, and it would be a mistake to consider "Laura" a noir novel. It is more akin to a suspense, detective story and features a detective as a primary character. It is also a romance and a story of a woman making her way in the world.

The book revolves around the apparent murder of Laura Hunt, a single woman of 29 who has achieved success working for an advertising agency in New York City. The story is tightly-knit and includes four primary characters, Laura herself, Waldo Lydecker, 52, a pudgy collector of antiques and a renowned columnist, Shelby Carpenter, 32, Laura's fiancé, and Mark McPherson, the young detective assigned to solve Laura's murder. McPherson must solve the murder from a small group of suspects. In the process, he becomes emotionally attracted to the woman whose death he is called upon to resolve.

The book shows depth in its handling of character, particularly of the ambitious and emotionally vulnerable Laura and of the taciturn, self-educated, and deeply romantic detective. Laura, an independent career woman before this became a norm, is sociable and also looking for love. She has been the friend of the pudgy, eccentric Lydecker for many years who has harbored romantic designs on her. Carpenter is Laura's junior at the advertising agency and he has a strong tendency to wander to other women.

The story builds slowly with many twists and turns. Lydecker, McPherson, and Laura each tell part of the tale in the first person from their own perspectives. Caspary has an excellent ear for voice and character, with each section of the story revealing a great deal about the teller as well as moving along the plot. The book offers glimpses of 1940's New York City, primarily in upper-class neighborhoods, businesses, and restaurants but with scenes of hardscrabble life in the poorer sections as well.

The LOA volume offers background on the book and its author. "Laura" was first published in serialized form in 1942 before the publication of the book in 1943. It was dramatized and produced on stage before Hollywood bought the movie rights leading to Preminger's film. The book has been in and out of print over the years, while the movie has become a classic. Caspary (1899 -- 1987) led a long eventful life and first became a writer while holding a series of commercial jobs. She wrote several novels before and after "Laura" together with an autobiography. Caspary became a member of the communist party in the 1930s, travelled to Russia, and attempted to resign from the party. Her radicalism and association with communism lead to difficulty in the l1940s and 1950s. There is an element of social criticism in "Laura", but in its writing and understanding of loneliness and the human condition, the book readily transcends ideology. As often happens in literature, the author in "Laura" is wiser than her creed.

"Laura" is a classic American suspense novel worthy of its new place in the Library of America. The LOA kindly sent me a review copy of its new anthology of "Women Crime Writers".

I saw the movie, loved it . Read the book loved it,but not as much as the movie. Its a good read.

I enjoyed this book. However, this is one of the few times that I think the movie was better than the book. The book has the feel of a typical mystery novel. The movie had a very haunting quality to it . Beautiful,ethereal Gene Tierney was perfectly cast as Laura and of course, there is the wonderful classic theme music. That said, the book is still worth the read.

Although this book has very little blood and gore as do the more modern mysteries, it is a classic story on which an equally classic movie was based. Well worth the read .