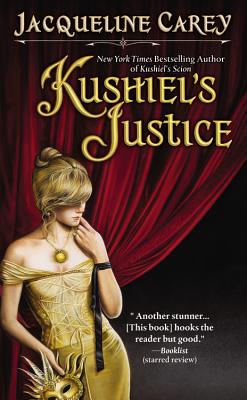 Third in line for the throne, Imriel honors his role by marrying an Alban princess. By choosing duty over love, Imriel and his lover--and cousin--Sidonie may have unwittingly trespassed against Elua's law. Before the end, Kushiel's justice will be felt in heaven and on earth. Read More

Third in line for the throne, Imriel honors his role by marrying an Alban princess. By choosing duty over love, Imriel and his lover--and cousin--Sidonie may have unwittingly trespassed against Elua's law. Before the end, Kushiel's justice will be felt in heaven and on earth. Read Less

All Editions of Kushiel's Justice

Mistress of the Empire

Daughter of the Empire

Recapturing the urgency of previous books

The second book of the Imriel de la Courcel trilogy manages to redress some of the weaknesses present in the first book by turning it into something of a Greek tragedy. Instead of trying to rival the first three books of the series in enormity of scope, Carey tightens her focus to the themes of duty, honor, and vengeance.
Committed to doing his duty to his country, Prince Imriel agrees to a political marriage with a princess of Alba. This leads to arguably one of the saddest narratives in the entire Kushiel's Legacy series. Seeing as the entire series is built on the precept of their fictional "deity," which is to "love as thou wilt," the violation of this edict for the sake of duty leads Imriel on a journey of terrible self-discovery.
In this book, I rediscovered the sense of gripping urgency which had been present in my reading of the Phèdre books. It seems Carey rediscovered her knack for writing a high stakes plot, which I was glad to see. As before, Imriel is a well-written character for whom the reader feels deely. The visual imagery in which Carey excels is also present in spades.

I've read the other books in this series, so I thought this book was awesome. But it is also a stand alone book, meaning you don't necessarily need to have read any of the others. It provides a deeper depth to the books I have already read in this series, and is such a compelling read, I would have loved it, had it been the first book of this series I had read. So...enjoy...

Absolutely awesome, however I strongly recommend reading the other novels in this series. It might be hard to follow if you don't know how it all came about. Jacqueline Carey writes an extremely fantastic story where the reader can become a character in the book. Love it Love it love it. Now I just have to wait for the nail biting time period for the following novel AHHHHHHHH! I am 100% positive it will be worth it, read them all and escape.
So people go out and buy the series!!! :)