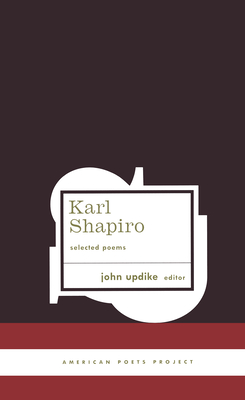 In this new selection, master literary craftsman John Updike provides a long-overdue reassessment of Karl Shapiro, a Pulitzer Prize-winning poet who has become one of the defining figures of the postwar period. Read More

In this new selection, master literary craftsman John Updike provides a long-overdue reassessment of Karl Shapiro, a Pulitzer Prize-winning poet who has become one of the defining figures of the postwar period. Read Less

The Prosody Handbook: A Guide to Poetic Form

Poet: An Autobiography in Three Parts

The Poetry of Pablo Neruda

The Library of America founded the American Poets Project in 2003 to present the work of American Poets who generally were not fully represented in the LOA's main series. In the words of David Starkey: "[n]ow at 32 volumes, the series offers an eccentric and largely gratifying look at many of the lesser lights of American poetry". (Santa Barbara Independent, April 30, 2019). Among the writers included in the American Poets Project is Karl Shapiro, (1913 -- 2000) in this 2003 volume of Selected Poems edited and introduced by John Updike (1932 -- 2009). The volume offers a good selection of works from throughout Shapiro's career from the early 1940s through the early 1990s together with Updike's thoughtful overview of Shapiro's work. This brief volume might serve to carry forward Shapiro's work to current and future readers and to prevent it from being forgotten.

Shapiro was born in Baltimore and served three years as a medic in New Guinea during WW II. From just before his service and through and beyond it, Shapiro wrote prolifically. His writings brought home to readers the war experience with its death and destruction through the return of the soldiers in sailors in a poem titled "Homecoming". I am writing this review on December 24: thus here is a Shapiro poem from the war years titled "Christmas Eve, Australia".

"The wind blows hot, English and foreign birds
And insects different as their fish excite
The would-be calm. The usual flocks and herds
Parade in permanent quiet out of sight,
And there on crystal like a grain of light
Sticks in the crucible of the day and cools.
A cloud burnt to a crisp at some great height
Sips at the dark condensing in deep pools.

I smoke and read my Bible and chew gum,
Thinking of Christ and Christmas of last year,
And what these quizzical soldiers standing near
Ask of the war and Christmases to come,
And sick of causes and the tremendous blame
Curse lightly and pronounce your serious name."

During these years, Shapiro also wrote poems about his pre-war life and about finding beauty in everyday seemingly pedestrian objects, such as the poems "Buick" and "Honkytonk". He also wrote poems about how he saw his relationship to Judaism and his Jewishness. Shapiro received substantial recognition for his early poetry, including the Pulitzer Prize and an appointment to what is now the position of United States Poet Laureate from 1946 -- 47.

In the mid-1960s, Shapiro's poetry took a new direction. The early poems, such as the poem quoted above, are traditional in form in rhyme and meter. Many other poets of his time had written in more modernist forms. Shapiro's "The Bourgeoise Poet" published in 1964 shows the influence of Walt Whitman and the Beats. the book consisted of untitled prose poems with sprawling themes, and lengthy unmetered lines and paragraphs. Titles subsequently were added to the individual poems, which include works such as "The Bourgeois Poet", "High School" "Burlesque" and "I am an Atheist who says his prayers".

The poems could be irreverent, satirical and critical. However, Shapiro, unlike many other writers, retained a positive view of America and of the middle, middling class of which he was a part A generous selection from the "Bourgeois Poet" is included in this volume of selected poems.

The poems in this volume center around the early writings and around "The Bourgeoise Poet". The works written between the two and after "The Bourgeoise Poet" seem largely to return to Shapiro's earlier style. His poem shows a modern, personal sensibility informed by a basic conservatism which makes his work unusual.

I had read some of Karl Shapiro before and enjoyed broadening my reading of his work with this selection. I liked his Jewish-themed works, including "My Grandmother", "The Synagogue", "Israel", "The First Time", "The Convert", and "My Father's Funeral". I also enjoyed the poems satirizing intellectual life and its frequent pretentiousness and the many love poems in the volume.

This volume and the American Poets Series performs a service both in making the works of Karl Shapiro accessible and also in allowing readers to explore the creative breadth and variety of American poetry.