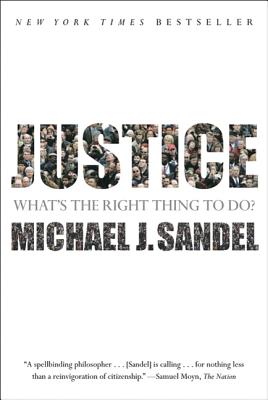 Michael Sandel's Justice: What's the Right Thing to Do? invites readers of all ages and political persuasions on a journey of moral reflection, and shows how reasoned debate can illuminate our lives. Is it always wrong to lie? Should there be limits to personal freedom? Can killing sometimes be justified? Is the free market fair? What is the right thing to do? Questions like these are at the heart of our lives. In this acclaimed book Michael Sandel - BBC Reith Lecturer and the Harvard professor whose 'Justice' course has ... Read More

Michael Sandel's Justice: What's the Right Thing to Do? invites readers of all ages and political persuasions on a journey of moral reflection, and shows how reasoned debate can illuminate our lives. Is it always wrong to lie? Should there be limits to personal freedom? Can killing sometimes be justified? Is the free market fair? What is the right thing to do? Questions like these are at the heart of our lives. In this acclaimed book Michael Sandel - BBC Reith Lecturer and the Harvard professor whose 'Justice' course has become world famous - gives us a lively and accessible introduction to the intersection of politics and philosophy. He helps us think our way through such hotly contested issues as equal rights, democracy, euthanasia, abortion and same-sex marriage, as well as the ethical dilemmas we face every day. 'One of the most popular teachers in the world' - Observer 'Enormously refreshing ... Michael Sandel transforms moral philosophy by putting it at the heart of civic debate' - New Statesman 'One of the world's most interesting political philosophers' - Guardian 'Spellbinding' - The Nation Read Less

All Editions of Justice: What's the Right Thing to Do?

The Tyranny of Merit: What's Become of the Common Good?

The Tyranny of Merit: Can We Find the Common Good?

A Theory of Justice

Liberalism and the Limits of Justice

Justice And The Good Life

Michael Sandel is Professor of Government at Harvard. His course on ethics has for many years attracted large numbers of students. His book "Justice: What's the Right Thing to Do?" likewise has brought philosophical questions in the public sphere alive to many readers. I heard Sandel give the contents of this book in a 5-CD audio set. Sandel reads clearly and slowly, and I was able to follow the presentation. Still, I greatly prefer written books to audio.

Sandel's book is insightful in the way it combines philosophical theory with discussion of contemporary political issues. He tends to move back and forth between them to show how they are related and to suggest how different ethical approaches may give different answers to ethical dilemmas. Sandel's answers to specific questions tend to be on the liberal side of the American political spectrum. There is a fluidity in his approach, however, which recognizes that ethical questions involve issues of value and worth, which are subjects of discussion and good faith disagreement.

The part of this book I most enjoyed was Sandel's exposition of great ethical philosophers. He offers careful introductions to Bentham, Mill, Kant, John Rawls, and Aristotle. Broadly speaking, Sandel distinguishes three approaches to Justice and the Good Life: 1. utilitarianism, 2. various schools emphasizing individual autonomy and freedom of choice. 3. "virtue" ethics which involves cultivating virtuous behavior and reasoning about the common good.

The third approach derives from Aristotle. It is the ethical philosophy of most appeal to Sandel. His discussion of Aristotle's politics and ethics is sympathetic and good in its emphasis on teleology -- purpose -- as a key component of human activity and in its recognition of the inherently social and political nature of human life. Sandel's approach is fresh because Aristotelianism generally has more appeal to conservative tending thinkers than to liberals. But Sandel argues for a "politics of the common good" which takes moral and spiritual concerns seriously and does not leave such issues solely in the purview of the Christian right. He rejects attempts at value neutrality -- which involve making decisions about public issues which claim to be nonjudgmental about the values of individuals. We need to come to terms with values, Sandel argues and discuss them with our fellows in a community. Politics requires moral engagement and a culture of respect.

I found much to be learned from Sandel. Sandel's discussions of specific questions of public ethics are also good but for me less interesting than his discussion of broader questions. He discusses questions such as abortion and gay marriage but he emphasizes that such difficult issues of the culture wars far from exhaust the scope of ethics. Sandel is probably more concerned with matters such as the growing inequality of income in the United States and its bad effect on our public life and on questions about the proper sphere of markets and about the place of non-market norms in ethical decisionmaking. He uses many examples, large and small, to illustrate his questions. For example, he discusses the philosophical parable of the "runaway streetcar" which shows some of the difficulties people tend to find with utilitarianism and about their seemingly inconsistent responses to similar ethical situations.

Sandel examines a recent Supreme Court decision brought by a professional golfer who needed to use a cart on the golf course because he was unable to walk. He sued because the professional golf association would not allow him to use his cart to play in a major tournament. The Court ruled the golfer was entitled to play. For Sandel, the case raised various ethical questions and questions about personality that involve the telos -- the purpose -- of the game of golf. Is part of the goal of golf to test the participant's capacity for strenuous physical activity (as is football, say) by walking around the course? Or is the purpose to show the player's skill in concentrating and responding to mental stress by putting the ball in the cup in as few strokes as possible? Sandel supports the player and the decision of the Court in the case by finding that golf tests the latter skill set rather than the former.

Other ethical questions, for Sandel, involve the telos -- the purpose -- of an activity and the type of human behavior that deserves to be honored. Sandel examines the debate about gay marriage and asks about the telos of marriage. Is its purpose procreative, or the celebration of love and commitment between two people regardless of gender, is it both of these, or is it something else? Sandel's own answer to this question seems rather clear. The reader or listener, however, may consider the issue using Sandel's Aristotelian framework and work to his or her own conclusion.

I was not always persuaded by Sandel's own answers to particular questions. But I enjoyed this book and the reminder it offered me of the importance of ethics and its role in public life.

Michael Sandel connects the philosophies of Ancient Greece, the Enlightenment, and the 19th century with some of the difficult questions of today's American political life. The reader has an opportunity to weigh several philosophic arguments regarding political justice, to recognize their legitimate and not always compatible claims, and perhaps to choose a favorite.