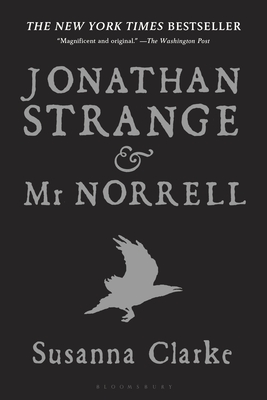 Two magicians shall appear in England. The first shall fear me; the second shall long to behold me Centuries ago, when magic still existed in England, the greatest magician of them all was the Raven King. A human child brought up by fairies, the Raven King blended fairy wisdom and human reason to create English magic. Now, at the beginning of the nineteenth century, he is barely more than a legend, and England, with its mad King and its dashing poets, no longer believes in practical magic. Then the reclusive Mr Norrell of ... Read More

Two magicians shall appear in England. The first shall fear me; the second shall long to behold me Centuries ago, when magic still existed in England, the greatest magician of them all was the Raven King. A human child brought up by fairies, the Raven King blended fairy wisdom and human reason to create English magic. Now, at the beginning of the nineteenth century, he is barely more than a legend, and England, with its mad King and its dashing poets, no longer believes in practical magic. Then the reclusive Mr Norrell of Hurtfew Abbey appears and causes the statues of York Cathedral to speak and move. News spreads of the return of magic to England and, persuaded that he must help the government in the war against Napoleon, Mr Norrell goes to London. There he meets a brilliant young magician and takes him as a pupil. Jonathan Strange is charming, rich and arrogant. Together, they dazzle the country with their feats. But the partnership soon turns to rivalry. Mr Norrell has never conquered his lifelong habits of secrecy, while Strange will always be attracted to the wildest, most perilous magic.He becomes fascinated by the shadowy figure of the Raven King, and his heedless pursuit of long-forgotten magic threatens, not only his partnership with Norrell, but everything that he holds dear. Elegant, witty and utterly compelling, Jonathan Strange & Mr Norrell creates a past world of great mystery and beauty that will hold the reader in thrall until the last page. Read Less

All Editions of Jonathan Strange and Mr Norrell

The Ladies of Grace Adieu: and Other Stories

Piranesi: WINNER OF THE WOMEN'S PRIZE 2021

The Ladies of Grace Adieu: and Other Stories

A Long Stay in a Distant Land

Kafka on the Shore

My favorite fantasy since JRR Tolkien

I couldn't believe how I could have missed such a wonderful book. Not since I read JRR Tolkien as a teenager has there been such an entertaining book, and a magical literary journey. While it's not action packed or fast paced, it makes the pleasure last, like sipping fine wine instead of downing it fast!
I highly recommend it, and wish the author would write more of this sort of story.

This book starts a bit slow and there are too many characters introduced in the beginning to keep up with. But as you get into it, you are somehow transported back in time to the early 1900's and can witness the Napoleonic wars and hobnob with Lord Byron. The world of lost magical possibilities is opened a bit and it almost reads as an actual history. I found this a very enjoyable book.

Worth the lengthy read

Perhaps the most amazing thing about Susanna Clarke's debut novel, Jonathan Strange & Mr. Norrell is not the tales of magic, the land of Fairie, the way the English supposedly cast spells over Napoleon Bonaparte to win the war...but the fact that Clarke got a 800-plus page novel published as her very first. That's remarkable...but then, so is the book.

I've never been one to read "fantasy" novels, and despite liking this a great deal, I doubt that this will change. But Clarke's novel is a wonder: it begins with the premise that many hundreds of years ago, magic was accepted and widely practised throughout England, a land that intersects the magical kingdom of Fairie. Indeed, it was so accepted that one king - the Raven King, aka John Uskglass - ruled both kingdoms, as well as a third that most presumed to be Hell.

Flash forward to the early 1800s, and magic is more of a philosophy, something to be debated and studied, but not practised. Gilbert Norrell, a recluse who has bought up most of the magic books in the world, is different. He can practise magic, and because he sneers at others who merely talk about it, he comes up with a way to ensure that he is the only magician in England. All this changes when Jonathan Strange arrives; a gifted prodigy, the two begin a mentor-student relationship that forms the majority of the novel.

The story itself is quite interesting, and though it's longer than it need be, that's rarely an issue. The tone of the book is written in an Olde English style, a la Jane Austen, which does take a bit of getting used to, but again, no real complaints. Where I had issues occasionally was with the footnotes. As a huge fan of David Foster Wallace, I'm not one to complain about lengthy footnotes, but at least his are often relevant to the plot. Here, more often than not, they were amusing anecdotes, but merely that. With a book of this length, either have them lend value to the plot, or tighten it up.

All of that being said, Jonathan Strange & Mr. Norrell was a thoroughly enjoyable book, and one that I'd definitely recommend.

Jonathan Strange and Mr.Norrell follows the lives of two English magicians during the era of the Napoleonic Wars. Mr. Norrell is a solitary, cautious magician and Jonathan Strange is young, sociable, and enjoys taking risks. For a time they work together to bring magic back to England, but soon it seems a quarrel is inevitable.
Despite its great length, I found this book to be one of the most enjoyable books that I have read in quite some time. I loved the characters' various eccentricities and quirks, and I thoroughly enjoyed the author's dry somewhat ironic sense of humor. I do think that the often essay-length footnotes were a bit much. These tangential stories were interesting in themselves, but for me it often took away from the story rather than adding to it. In all, I think this is a fantastic work, and I hope to read more by this author.

I got through two thirds of this book and I finally got tired of waiting for something interesting to happen. The premise of magic in a Jane Austen-type of setting is what lured me in, but the pacing in this book is so poor that I couldn't stick with it. Clarke is not a bad writer, but she ain't no Jane Austen.