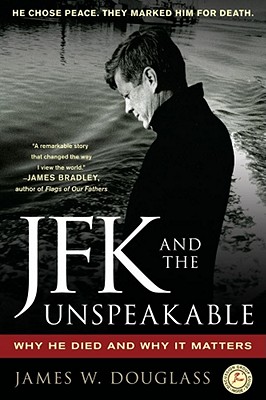 JFK and the Unspeakable: Why He Died and Why It Matters

James W. Douglass sheds new light on the Kennedy assassination and its significance, taking listeners from the Oval Office to the fateful presidential motorcade in Dallas and exposing the Unspeakable forces behind it all. Read More

James W. Douglass sheds new light on the Kennedy assassination and its significance, taking listeners from the Oval Office to the fateful presidential motorcade in Dallas and exposing the Unspeakable forces behind it all. Read Less

All Editions of JFK and the Unspeakable: Why He Died and Why It Matters

Gandhi and the Unspeakable: His Final Experiment with Truth

Resistance and contemplation; the way of liberation

The non-violent cross: a theology of revolution and peace

Lightning East to West: Jesus, Gandhi, and the Nuclear Age

Crossfire: The Plot That Killed Kennedy

The Man Who Knew Too Much: Hired to Kill Oswald and Prevent the Assassination of JFK: Richard Case Nagell

Act of Treason: The Role of J. Edgar Hoover in the Assassination of President Kennedy

The Devil's Chessboard: Allen Dulles, the CIA, and the Rise of America's Secret Government

Last Word: My Indictment of the CIA in the Murder of JFK

This book is the definitive book on the JFK assassination. It should be a must read for every high school student and everyone else as well. This book will wake you up to the reality of what Abraham Lincoln warned us about 100 years before the Kennedy election.
God help us all !

JFK and the Unspeakable: Why He Died and Why It Matters by James Douglass.

Not only is this volume a masterwork of thorough research, it is a meaningful blend of Christian pacifist theology and 20th century history. For Americans, and the rest of the world threatened by U.S. military hegemony, it could be the most important book in English of the last 50 years. Douglass aligns the concerns of theologian Thomas Merton with President Kennedy?s intentions in 1963 to pull U.S. troops out of Vietnam.
Researchers today have an advantage over investigative reporters of the 60s and 70s, like Mark Lane, thanks to the declassification in the 1990s of reams of revealing assassination documents. Douglass takes full advantage of this heightened perspective and blows away the disinformation chaff to reveal the bones of the conspiracy we always knew was somewhere under there.
Combining an extensive current bibliography with his own personal interviews with November 22 witnesses and their surviving spouses, Douglass assembles key pieces of the conspiracy jigsaw puzzle until a clear picture emerges. Kennedy was killed, marked for death by his own government, because he sought a path toward peace in the world.
Given Douglass? moral imperative to write this book, one would expect, if not a final chapter, at least an epilogue pointing out the parallels with today?s tragic war in the Middle East and the fact that the military/industrial complex President Eisenhower warned us about has taken control of the government and is now running the country for its own profit. The omission of such a summary is conspicuous ? and ominous.
The history lesson in JFK and the Unspeakable is a clear warning to all Americans; a frightening, must-read book.