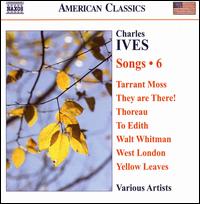 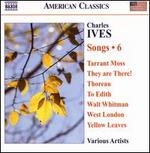 Ives' Songs From T To Y

With the creativity for which it is famed, the budget-priced Naxos label has fulfilled the rambunctious project of recording the complete songs of Charles Ives (1874 -- 1954) arranged in alphabetical order. The songs are recorded by a variety of young singers, pianists, and other musicians affiliated with the Yale School of Music. (Ives spent his college years at Yale.) The series offers the rare opportunity to explore Ives as a composer of American song. The listener may simply browse and enjoy the songs or explore them in detail with the help of the program notes, replete with cross-references between related songs, by Richard Whitehouse. This, the final volume of the complete Ives songs,is among the best in the series.

The CD consists of 33 songs, beginning with "Tarrant Moss" (1902), a short setting of a poem by Kipling, and concluding with "Yellow Leaves" (1923), a late, impressionistic song beautifully performed by mezzo-soprano Mary Phillips. (Phillips's performances of five songs are among the highlights of this recording.) As a result of the alphabetical arrangement, the CD offers an excellent cross-section of Ives's changing styles and themes.

In my listening, I tried to group the songs I enjoyed by subject matter. In two lovely songs with texts by Ives's wife Harmony, Ives sings of the joy of his family life. The first is the well-known "To Edith" (1919),sung by Phillips, which is about the Ives's adopted daughter. The second is the less-frequently performed "Two Little Flowers" (1921), sung by baritone Michael Cavalieri with a rippling arpeggio piano accompaniment by Douglas Dickinson. The little song celebrates "the fairest flowers of them all" -- Edith and Susannah.

Many of Ives's songs on this CD have political themes. I will describe them in reverse chronological order. In 1942, Ives's revised his earlier WW I song, "He is there" and recorded it himself under the title "They are There". The song is rousingly performed on this disk by seven voices singing in unison together with piano and piccolo.The song ends with a delightful curlicue. Two other songs, "The Things our Fathers Loved" (1917), sung by bass David Pittsinger, and "Tom Sails Away" (1917), with baritone Patrick Carfizzi and pianist J.J. Penna, offer pictures of the simple values of American life, as American soldiers leave for the front in WW I.

The song "Vote for Names!Names!Names!"(1912) is a satire of the noisy 3-way presidential race among Roosevelt, Taft, and Wilson, as three pianos bang out discordancies all but overwhelming the singer, tenor Ryan McPherson. An early Ives song "William Will" (1896) sings the virtues of then-presidential candidate William McKinley to the tune of a flamboyant piano accompaniment. Baritone Carfizzi and pianist Dickson clearly enjoy themselves. In another work of Americana, the CD includes an excellent song called "Thoreau" (1915), a figure Ives admired greatly, and what I feel is a less successful song about Walt Whitman (1921).

Songs that I enjoyed that do not readily fit into any category include "Yellow Leaves" (1921), mentioned earlier, "Watchman!" (1913), and "The White Gulls" (1921),all sung by Mary Phillips, "Where the Eagle Cannot See" (1906), a mystical song performed by soprano Jennifer Cabot and pianist Eric Trudel, and "Walking" (1900), performed by baritone Michael Cavalieri.

This CD and its companions are excellent ways to get to know Charles Ives as a master of American art song.