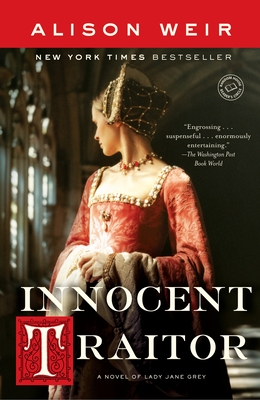 All Editions of Innocent Traitor: A Novel of Lady Jane Grey

Against Our Better Judgment: The Hidden History of How the United States Was Used to Create Israel

The Six Wives of Henry VIII

This book was one of those books that reaches out and grips you to the very soul. Even though I knew the way the book had to end, it was still shocking to the system. The author did a great job of keeping the attention when moving from one point of view to another.

This is a great read. Goes a bit slowly, but she only lived 16 years...all in all, wonderful. Have had 3 other people read it and have bought another Allison Weir book...excellent.

I have enjoyed the book, I like the author's style and historical accuracy. I would recommend it to others who enjoy this period in history-it gives a differant perspective on a probably little known person in Lady jane Grey.

I listened to the audiobook of Innocent Traitor--a wonderful choice, since the readers were all exceptional. The book is structured in short chapters, written like journal entries by people influential in the life of Jane Grey (he mother, Katherine Parr, Mary Tudor, etc.), and this also made it perfect for audio listening. Weir gives a detailed and believable portrait of the life of an aristocratic child in the sixteenth-century, and of the intense political milieu of the times. After reading the novel, one wonders what might have happened had Jane been able to retain the crown and break free from her Dudley inlaws. A captivating piece of biofiction.

Haunting tale of treachery and innocence

The story of Lady Jane Grey, the tragic Nine Days Queen, is familiar to most people who read about the Tudor period. Nevertheless, she exerts a powerful attraction because she was kin to Henry VIII?s children and became a pawn through no fault of her own, coming to the fore during a crisis in the Tudor succession following the death of Edward VI.
?Innocent Traitor? -- acclaimed historian Alison Weir?s entry into the historical fiction arena -- brings Jane Grey to life in a unique and vibrant way. Through a medley of voices, including Jane?s own, that of her mother Eleanor of Suffolk, her devoted nursemaid, and even Jane?s royal cousin Mary Tudor, we experience the maneuverings and intrigues of life at court through various perspectives and opinions. We also come to know Jane as an emotionally abused child of gifted intelligence; as a young woman of staunch faith and honor; and as a reluctant queen whose pure reformist vision cannot overcome the depredations of her father-in-law and his ruthless associates. Helpless to stem the forces moving against her, Jane records her fate with stoic dignity and a keen eye.
It?s to be expected that any book by Ms. Weir will be full of intimate details about life in the era; nevertheless, she does not overwhelm the narrative but rather expertly seasons it with facts that display her painstaking commitment to authenticity. In addition, she imbues even such unpleasant characters as Jane?s parents with foibles and vulnerabilities of their own, giving them flesh-and-blood dimension. Jane?s mother in particular dominates with her leonine pride in her royal blood, her rapacious ambition and her lusty marriage to a man who is her intellectual inferior. A true survivor of her time, she does not concede defeat, bending to obstacles when she cannot mold them to her will.
Readers of historical fiction should not miss this compelling debut by one of England?s foremost authorities on the Tudors -- a tale of grandeur, betrayal and innocence, framed by one woman?s journey from throne to scaffold.